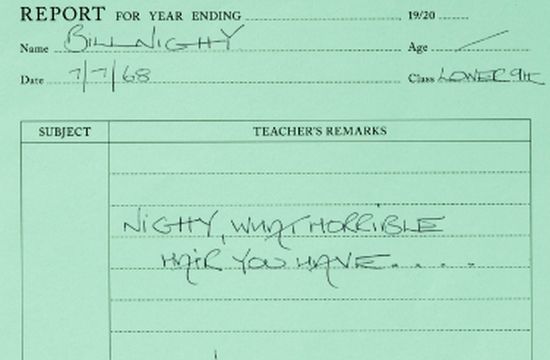 It’s that point of the year when children fret, parents steel themselves and teachers practice their most acidic Dorothy Parker impressions – it’s school report card time. But this year it’s not just school children who are sheepishly unearthing stinging teacher feedback from the bottom of their backpacks. A slew of celebrities have been sharing their most memorable report card quotes in a new campaign for Cecily’s Fund, a charity that provides education for orphans and vulnerable children in Zambia.

The project was devised by recently-launched London agency Dawson Pickering. They came up with the idea of raising money and awareness for the charity by getting celebrities to share their unforgettable school reports. In order to get the stars involved, the agency created a school desk dispenser packed with forms to leave in sound studios. As celebrities waited to record voice overs for commercials and TV shows, they passed the time by filling in the forms.

“The school report is an idea we came up with a few months ago,” explains Neil Dawson, co-founder and ECD at Dawson Pickering. “It just occurred to us that as an agency what we do have is a lot of contact with a lot of celebrities through the sound studios that we use. We just thought there was a really nice captive moment there; celebrities are not doing very much while they’re waiting for their recording to happen, so it seemed a perfect time to create something that would be an asset for the charity to use to get money or to raise awareness…. The studios have taken away loads of forms, not only for people coming into the studio but they have also spoken to voice over agents directly. They’ve been immensely helpful.”

Dawson has been blown away by the response of stars who have gone above and beyond in their efforts to help. The newest Doctor Who star, Peter Capaldi, has even gone as far as creating a fictional report card for The Doctor. And Ab Fab’s Joanna Lumley undertook some research of her own to make sure her report card was as accurate as possible. “Joanna Lumley who couldn’t remember a good enough quote from her report so took a form away, filled it out in the evening and brought it in the following say,” says Dawson. “What a sweet heart she is!” 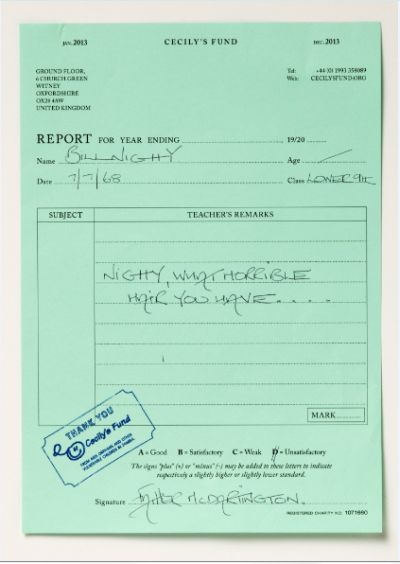 One of Dawson’s personal highlights so far has been seeing the report from actor Bill Nighy. “I like Bill Nighy’s report. The priest at his school clearly didn’t like his hair very much and felt it was appropriate to tell him what awful hair he had. We don’t have a picture of Bill Nighy from those days so I can’t actually comment on the accuracy of that!”

The reports will be auctioned online to raise money for Cecily’s fund – the auction opens on June 24, but there are already two sneak previews available from Natasha McElhone and Jason Flemyng. Other celebrities include The Wire's Idris Elba and Downton Abbey star Hugh Bonneville. After the auction, the reports will be compiled into a coffee table book which should be available in time for Christmas.

Cecily’s Fund was founded in 1998 in memory of Cecily Eastwood, who died in a road accident while volunteering with children in Zambia. The collaboration with Dawson Pickering came about because an old schoolfriend of Dawson is a trustee of the charity. But for Dawson the project also has a special place in his heart – having travelled in Zambia he is all too aware of the important role education charities such as Cecily’s Fund play in the area. 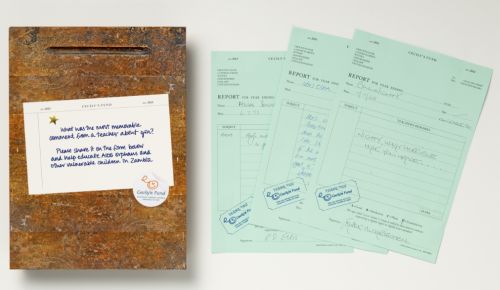 So far Dawson Pickering has been working closely with Jungle, Factory, Wave and Clearcut in London’s Soho to reach out to celebrities, but Dawson is keen to open up the project to other recording studios and industry players. Anyone who wants to get involved should get touch via the Dawson Pickering website.

As for Dawson, does he have any report card zingers that have stuck in his mind over the years? “My father only remembers two from my report. One was from my French teacher after I got an A in my French Common Entrance which was quite extraordinary. My French teacher wrote ‘Neil’s exam results are bordering on the miraculous’. And my headmaster said ‘I’m not sure if Neil is the naughtiest boy in the school or just the unluckiest’.”