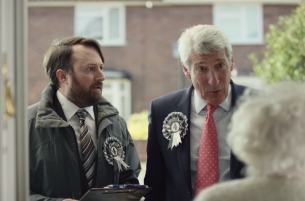 Jeremy Paxman and David Mitchell lead the charge in Channel 4’s very own 2015 election campaign, becoming the faces of the broadcaster’s catastrophic canvassing in a teaser for their Alternative Election Coverage.

With the nation poised for an evening of relentlessly serious political analysis, Channel 4 are offering a night packed full of alternative, comic commentary.

Led by Paxman and Mitchell, comedians Romesh Ranganathan and Aisling Bea star alongside Richard Osman and Cathy Newman in the teaser for Channel 4’s comedic take on election night, with the all-star line-up haplessly failing to drum up excitement ahead of May 7th’s  main event.

ENVY provided the post-production for the teaser trailer – created by Channel 4’s in-house agency, 4Creative, and directed by Neil Gorringe – including vfx work and sound design.

Dean Wyles, Lead VFX Artist, comments: “There are a number of vfx elements present in the film, our main task being the design and seamless integration of an election poster onto the side of a van.

Dean adds: “We also created the sign that David Mitchell plants into a front garden, compositing it into the scene. There are several scenes in which hand-held camera movement was added, and a bespoke endboard was designed to run over the whole election campaign on Channel 4.”

There’s lots of door slamming as the majority of voters are largely unimpressed with the celebrities’ ‘Watch Channel 4 on election night’ pitches.

Rich Martin, Senior Dubbing Mixer, adds: "The film was already funny when it walked through the door, so to really beef it up I added in a number of loud slams and threw some tweety-birds about."

ENVY also recently worked on the teasers for Ballot Monkeys, Channel 4’s real-time political sitcom that has aired in the build up to the election.