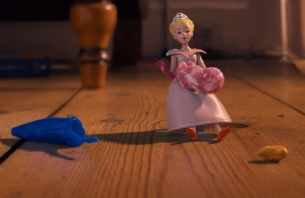 St John Ambulance has launched a new campaign teaching people how to save the life of a choking baby. The film, created by BBH London with planning and buying by John Ayling and Associates, marks a departure from the charity’s former harder-hitting tone and instead encourages people to share the film online widely with their friends and family, so that as many people as possible can learn to save a life.

In The Chokeables, the celebrities take on the character of animated objects that could potentially choke babies – a small princess toy, a pen lid, a jelly baby and a peanut. They’ve joined together because they’ve had enough and want to show how easy it is to save a choking baby’s life.

The film starts with David Mitchell, as a chewed up pen lid, asking for the audience’s attention. A jelly baby – Johnny Vegas – then explains that they’re fed up of real babies choking on innocent objects like them. He then starts struggling for breath and turns blue.

Walliams’ lofty princess character shows the correct technique to save the choking jelly baby – up to five back blows, followed by up to five chest thrusts – who coughs out a peanut (voiced by Sir John Hurt), before returning to his normal shade.

The campaign has been animated by Si & Ad.

The campaign will launch with an exclusive online preview to St John Ambulance supporters and social fans on 11 January followed by a TV burst on 12 January, in spots including Coronation Street, with pulsing throughout February and March. The TV is targeted at housewives with children under three, with a secondary consideration of grandparents.

Underpinning the TV is social media advertising, digital video and display advertising and PPC, the latter run by Reprise Digital. There is also a strategic partnership with Bounty, a key platform for reaching new and expecting parents.

The in-house PR team will be leading on securing exclusives and celebrity social media support, along with a detailed roadmap of activity, and new online assets, to maximise exposure for the campaign.

The campaign was developed after new research for the nation’s leading first aid charity revealed today that four fifths of parents (79%) wouldn’t know how to save their baby from choking to death despite it being a major fear (58%) and 40% having witnessed it.

Steve Conway, St John Ambulance’s Director of Brand Marketing. Communications and Fundraising, said: ‘This campaign marks a new stage in St John Ambulance’s approach. We are deliberately moving away from our harder hitting campaigns – which were useful at getting people to think seriously about first aid. Now we need to educate directly.

‘We’ve started with parents because our research showed they are an audience which really wants to know first aid. We hope they share the film and also look at our website for further resources.’

St John Ambulance has released new resources, including instructional videos, on its website to inspire everyone to learn life saving first aid skills.