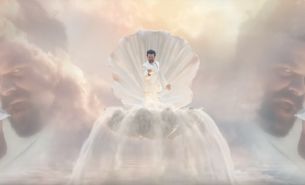 Created by Saatchi & Saatchi New York and directed by Traktor through Rattling Stick, the commercials feature Harbour parodying tropes often found in beer, perfume and car ads, before questioning if every Super Bowl ad is, in fact, a Tide ad.

There are four ads in total - one 45-second establishing ad and three 15-second ads, in which Harbour sneaks his way in to commercials for the likes P&G's of Mr. Clean and Old Spice.

“The Super Bowl is a moment where people are not only engaged in the game, but with the ads, so this year we sought to play into the commercials in a bigger, more creative way,” said Javier Campopiano, Chief Creative Officer of Saatchi & Saatchi New York. “Piggybacking off of last year, we’ve employed similar tactics in bridging our idea and the event and connecting viewers in a relevant and creative way. Clean clothes are obviously the hallmark of Tide, we used this concept to integrate a campaign that pushes the boundaries of advertising within the Super Bowl, while still remaining true to our devoted audience.”