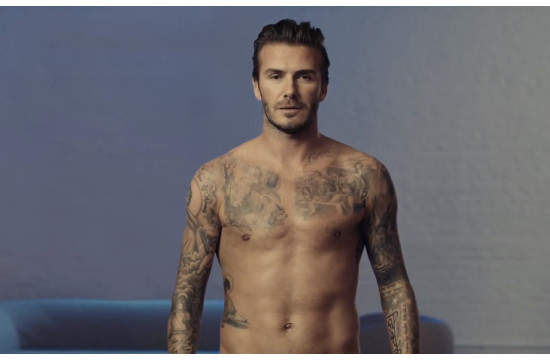 Refn, whose feature credits include Drive and Bronson, shot two spots over three days, leaving fans to vote on which version they’d prefer to see on Super Bowl Sunday:

Teasers released earlier this week feature a flummoxed Beckham inadvertently locked out of a photo shoot for his H&M Bodywear line. Garbed only in undies, Beckham performs action stunts on location around the Old Truman Brewery in East London to get back in to the building.

In the #Uncovered spot we witness Becks arrive back at the shoot minus his underwear, whereas the #Covered ad shows him arriving in his skivvies, allowing fans a better view of his athletic physique.

“David performed all of his own stunts so it was imperative to make it all safe,” explains Stink producer Fran Thompson. “Needless to say the risk assessments were enormous. We prepped the shoot for over a month in advance, then met with a stunt coordinator to plan David’s moves in accordance with the location.”

Structural engineers were also summoned, installing a crane for Beckham to wear a custom-made harness while performing dangerous stunts such as sprinting and jumping around on precarious rooftops.

Refn, who was working with Beckham for the first time, says the experience was productive for all involved. “I think David has an incredible persona and is a wonderful human being,” he outlines. “He understands production and the necessity of applying oneself 200 percent. Once he saw what I wanted to achieve he freed up the extra time, allowing us to go from a two-day to a three-day shoot. I have an enormous respect for him.”

Refn also notes a creative experience working with H&M. “They presented me with a super cool concept that consisted of placing David in dire situations,” Refn continues. “With that, I sat down with [Art Director Lee Swillingham] to hash out a more thorough story-line. It was a very easy and satisfying collaboration that was like making a mini independent film. The only issue was shielding ourselves from paparazzi during the shoot.”

“Commercials allow you to be very daring in multiple situations,” adds Refn, who has also helmed spots for Priceline and Nintendo. “I’ve been very fortunate to work with clients and agencies that have allowed me to contribute my creativity, resulting in very satisfying collaborations. I find commercial filmmaking great fun.”