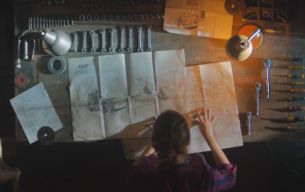 CZAR Amsterdam director, Willem Gerritsen, has created a moving film together with FCB Amsterdam that embarks on an emotional journey of a woman's memories of her father. The spot is part of the Safety & Security campaign for Mastercard, meant to highlight the importance of having your purchase insured against damage, loss, theft, and wrong delivery. The concept behind the film revolves around leaving nothing to chance when creating a perfect moment.

The story starts out with a woman discovering a photo of her younger self together with her father and his car. The viewer is unaware whether the father is still alive, and as the story develops, the woman restores her father's car to honour his memory.

This film itself was shot in Buenos Aires, Argentina. CZAR wanted capture a 'passing of time' element, showcased through a series of side events that happen while the woman is fixing the car, as well as through a classic film aesthetic, where everything seems to dissolve and fade away. Director Willem really manages to deliver a romantic consciousness towards the cinematography.

Willem Gerritsen comments: “We had to finish everything in three days, making sure that we were able to project an elaborate lighting plan and convey a legitimate message to the viewers. One of the most touching moments was almost unbelievable - the main actress gave a performance behind the camera in order to help the older actor in his shot. It was a very emotional moment for all of us and she couldn't stop crying because she was taken aback by the actor's performance and the scene that they were playing."

CZAR producer, Roos Blank said: “The production process was challenging, especially in finding the perfect looking car - the car is definitely one of the focus points of this film. We used three different cars in order to achieve an aesthetically pleasing vintage car. In the end, the car turned out looking exquisite. We were very proud to work on the campaign, we think it turned out beautifully and we hope it will speak well to the audience."

NB: The editor for this film, Wouter van Luijn, passed away on July 13th, 2018, at the age of 34 years. Wouter will be fondly missed by his beloved family, friends and colleagues. His works will be forever remembered by us.