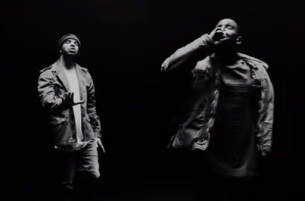 Production for the project took place on Feb. 16 at 1 Big Stage in Glendale, California. Director of photography was Joseph Labisi (recent credits include “Only” for Nicki Minaj, “Stuck On a Feeling” for Prince Royce and Kid Ink’s “Body Language,” the latter of which was also directed by Craig). Edited by Vinnie Hobbs of Vh POST (the editor behind “Body Language” and “Stuck On a Feeling,” plus most recently The-Dream’s “That’s My Shit” and Ne-Yo’s “Coming With You”), “Blessings” features visual effects by GloriaFX and Darren Craig’s fellow Uprising artist, Ryan Paterson.  Complete credits follow below, and PR stills readily are readily available upon request.

“This is my first time working directly with Big Sean, Kanye and Drake, and this is obviously a monumental song,” Darren says.  “With that in mind, we set out to create something dark and beautiful, I think we achieved that.”