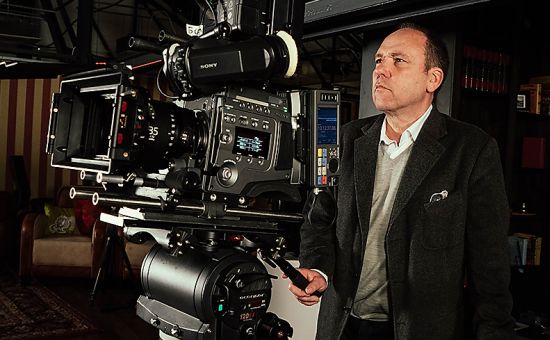 The idea of the Bond title sequence is an interesting one. Ever since Maurice Binder’s work on the Dr. No titles in 1962 - which birthed the 'Bond style’ - they have been infused with an iconic look that’s instantly recognisable. Stripped right back though, and a Bond title sequence is, well, a title sequence; a list of names keeping viewers waiting for the film they are eager to watch.

But that’s where Bond is unique. Ever since Binder made his mark, the 007 title sequences have kept audiences transfixed. These days, Danny Kleinman is the man charged with keeping this tradition alive. The Rattling Stick director has helmed every title sequence, bar Quantum of Solace, since Goldeneye back in 1995. Danny is also the director behind Sony Technology’s latest spot which features Naomie Harris (Moneypenny in the newly released Bond film Spectre).

Last week Danny spoke at a Sony-hosted event at Pinewood Studios, where Spectre was shot, and he was enthusiastic about his relationship with the 007 series and the creative freedom that it allows him. He made his name directing music videos in the early ‘80s - when the medium was pretty much an open page of creativity for a director - but fell out of love with them towards the end of the decade. Mostly due to the “really appalling music,” he thinks.

So Danny became more involved in commercials - but the opportunity to work on Bond allows him, he says, the same kind of freedom he used to find in music videos.

“I think of the Bond titles, in a way, as the biggest music video in the world. There’s a great track with great visuals that I have the freedom to come up with by myself. In that sense it’s got a real connection to music videos.”

And much like a music video, the song itself is as big a part of the opening sequence as the visuals. Adele’s Skyfall won a Grammy, an Oscar, a Brit Award and a Golden Globe, while Sam Smith’s offering for Spectre, ‘Writing’s On The Wall’, made history a few weeks ago by becoming the first Bond theme to reach number one in the UK chart. So what is Danny’s relationship with the song as he develops his idea?

“I typically start my process and read the script of the movie before it’s even started filming. But my relationship with the song is hugely different every single time,” he comments. “In the past I’ve got the song very late in play, once I had a lot of the sequence already planned out. I would get the song and hope it matches up! You have to be light on your feet because they could re-mix the song and make one part less dramatic than you thought it would be. So while I’m filming and doing the special effects and editing, I am always tweaking to make sure that it fits with the lyrics of the song.”

Danny is now seven deep in terms of Bond titles, and while it’s hard to play favourites among one’s babies, he makes no secrets as to the one that he is proudest of. “I still have a great soft spot for Goldeneye, even though it is technologically quite old-fashioned and, looking at it now, of its era. But I still have a lot of warmth for it,” he says. “It was the first one I did and I was so thrilled and excited to do it. I’m a huge Bond fan. Like most British blokes I grew up with it. Being able to bring something fresh to the language and seeing it projected at the premiere at the Royal Albert Hall was fantastic.”

His most favoured of all time, though, is Maurice Binder’s effort for You Only Live Twice. Binder, as mentioned above, was also behind the sequence for the first ever Bond film, Dr. No. But for Danny the quintessentially “Bondian” nature of You Only Live Twice, with its innuendo-laden erupting volcanoes and washes of colour, wins out. “I remember as a kid saying ‘wow’,” he says.

Those elements mark the much wider ‘Bond brand’. Today, Bond is so much more than a movie series and there’s a lot that brands can learn from it, says Danny.

“What’s amazing about Bond is that it’s instantly recognisable. The action is very idiosyncratic, the look is very idiosyncratic, everything is really geared towards creating this very particular world. The Bond logo with the gun barrel and Bond standing in the middle is apparently one of the most recognised images in the entire world. Other brands should concentrate on making what makes them unique, hone it down, and emphasise it in every way they can, in all aspects of what they are doing. When people see it, they should know it’s you.”