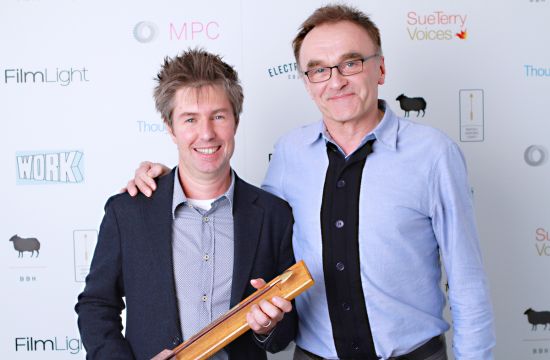 Monday night saw the British advertising production community come together to celebrate the best work of the past year at the British Arrows Craft Awards.

Slumdog Millionaire and Trainspotting director Danny Boyle made a surprise appearance at the start of the evening to present MPC colourist Jean-Clement Soret with the coveted British Arrows Craft Fellowship. Referring to Soret as ‘France’s best export since Thierry Henry’, Boyle enthused about Soret’s careful eye and finely honed skill before hinting strongly that he’d be keen to work with him on his next feature.

Soret also won the Gold Award for Best Colourist for his work on the moving Vodafone spot ‘Kiss’ from Grey London.

The other big award of the evening, Gold for Achievement in Production, went to 4creative for their equine thrill ride ‘Street Race’, which promoted Channel 4’s broadcast of the Grand National.

Other stand out winners for the night included the launch film for Ubisoft’s Assassin’s Creed: Black Flag which won Gold in Production Design, Live Action VFX and a Silver Arrow for VFX. Also taking two Gold awards and a Silver was the heart-stopping St John’s Ambulance campaign from BBH. Meanwhile ‘The Pony’ for Three Mobile proved to be more than a one-trick pony – MPC took Gold in the VFX and CGI categories and Wave took Gold in ‘Use of Recorded Music’.

The evening was hosted by comedian and friend of the production community, Adam Buxton, who entertained the crowd with a summary of Youtube in 2013, an assessment of John Lewis’ the Bear and the Hare and a comedic attempt to direct his young daughter.

There were, reportedly, several hangovers on Tuesday following an event that has become the unofficial launch of London's Christmas party season.