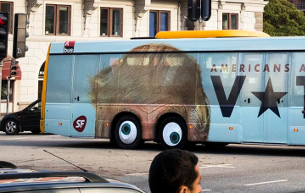 Over 7,500 kilometres away from the American election a Danish party has taken a stand with a single bus advertisement urging Americans living abroad to vote. In Denmark alone 8,714 Americans are able to vote and the Danish Socialist People’s Party have their eyes literally rolling at one of the candidates.

This year’s American election has a large impact on a country such as Denmark and when the election turns into a circus the Danish party sees it as an opportunity to provide a tongue-in-cheek comment from across the Atlantic.

Leader of SF, Pia Olsen Dyhr, says: "The ad is obviously done with a sense of humour, but we actually do take the US election very seriously. It has a huge impact on us all, even in tiny Denmark. Mr. Trump’s political views are very far from ours and I find it rather scary to think of him sitting in the oval office. I hope that we can influence some of the Americans living in Denmark and make them vote. Every vote counts."

The ad, created by creative agency Uncle Grey, leads people to a website called AmericansAbroadVote.org. Here they can find out where and how to vote from abroad. The bus, and Donald Trumps eyes, will continue to spin around the streets of Copenhagen, and the Internet, until Election Day.