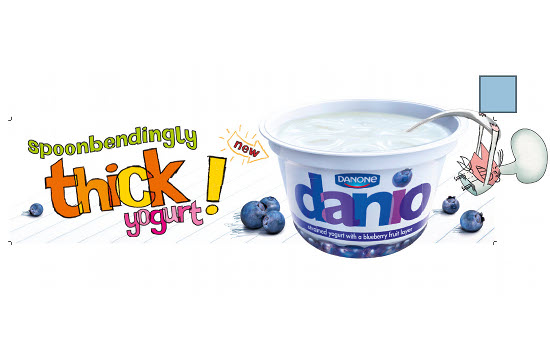 The London-centric campaign runs for two weeks from the 3 June to build on the momentum of the in-store launch of Danio at the end of January 2013, as well as the National TV campaign in April. The main elements of the activity include six special build sites around London - giving Danio a strong high street presence - as well as animated rail panels at main stations to target commuters from Greater London and the South East.

Ceyda Tort Turgay, Danio Senior Brand Manager said: “We’re delighted that Danio is taking over London with a high impact outdoor campaign. It will be exciting to see Danio featuring in some of the most high profile spots around the capital and we look forward to seeing this translate into sales of our fantastic new product.”

Sophie Pemberton, Comms Planning Manager at MEC said: “This is new and exciting media territory for Danone and it’s great that they have chosen a targeted London-based approach for the campaign. We’re eager to see how this type of activity impacts the launch of Danio so that we can consider how best to use this channel for future campaigns for other Danone brands.”

The creative, designed by Y&R, will focus on Danio’s animated ‘doodled’ characters as featured in the TV spot and will celebrate the spoonbendingly thick texture of Danio.