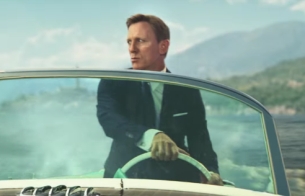 As part of its integrated global Spectre campaign, Heineken has unveiled a new TV ad featuring Daniel Craig as James Bond, in a high speed boat chase. In addition, it also announced an exciting digital campaign featuring the world's first ever selfie from space, dubbed the 'Spyfie'. The spot was created by Wieden+Kennedy Amsterdam and directed by Tom Kuntz at MJZ. Post production was by MPC London and keeping the shoot smooth and stylish was costume designer and stylist Mr Gammon.

Heineken's Spectre campaign is the brand's largest global marketing platform of 2015. Spectre, the 24th James Bond adventure, from Albert R. Broccoli's EON Productions, Metro-Goldwyn-Mayer Studios, and Sony Pictures Entertainment, will be released in the UK on October 26 and in the US on November 6.

The Heineken TVC will be launched mobile-first via Facebook, and will be shown on TV and cinema screens worldwide 24 hours later. Heineken is the only Spectre partner who has created a TVC starring Daniel Craig.

Heineken's TVC uses Spectre cinematographers and stuntmen to ensure the action sequences are authentically Bond. The added twist involves a young woman, Zara, who accidentally becomes involved in a high-speed boat chase where she helps the world's favourite spy to save the day.

Hans Erik Tuijt, Director Global Heineken Sponsorship said, "In celebration of a partnership spanning 18 years, our Spectre campaign is our most innovative ever.  The very nature of the Bond film franchise gives us opportunities to take a cutting-edge and pioneering approach that both excites and adds real value to the film fan's experience. By featuring Daniel Craig in our TVC and activating Spyfie once again we will give fans access to the world of James Bond".