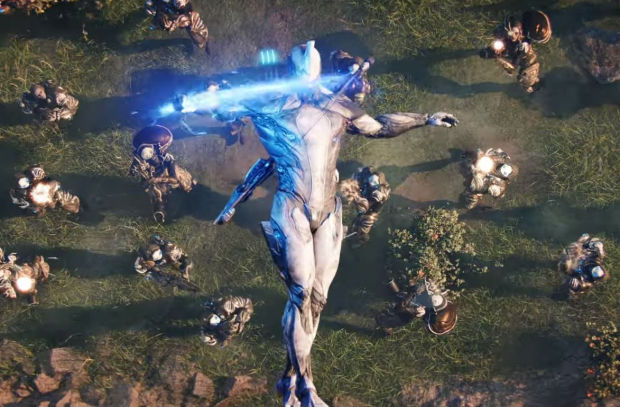 Dan Trachtenberg (10 Cloverfield Lane, Black Mirror) has directed a stunning new cinematic trailer for Warframe, a free-to-play cooperative action video game. Unveiled at Warframe’s own gaming convention Tennocon on Saturday 6th July, the mind-blowing new film will act as both the trailer and the opening cinematic in the highly-anticipated updated expansion of the game.
Produced by Great Guns, the six-minute film takes viewers on a captivating journey through the game’s fantastical universe, which is set in the far future amidst a devastating war waged by militarised human clones. Through the eyes of a young woman seeking refuge from the destruction, we see her discover shrines dedicated to a race of ancient warriors. Action-packed flashbacks show the warriors performing spectacular airborne manoeuvers – caught in a mixture of hyper-kinetic and glorious slo-mo in dazzling detail.
Director Dan Trachtenberg, repped globally by Great Guns, co-wrote and directed the breath-taking film, which draws on influences including Star Wars, Dune, and the films of Akira Kurosawa. He comments: “Being a huge fan, I tweeted about my love for Warframe – which was noticed by the makers of the game and we ended up geeking out together. In all of its six years, Warframe has never had an opening cinematic. Though we initially discussed making a live action one, we decided to go full CG when I expressed my excitement to work in the medium. My love for video games is equal to my love for movies, so this was a wonderful first foray into that world. I was able to storyboard this with my buddy, Brad Arnold, who is actually responsible for getting me hooked on Warframe – we’ve played the game for over 200 hours together. It was pretty amazing to unite on this project.”
This latest film expands Dan’s repertoire in more ways than one; in addition to being his first foray into directing video game cinematics and working in full CG, this was also the perfect opportunity to explore fresh genres and filming techniques.
Dan adds: “I’ve mostly worked on measured suspense movies so far, but burning inside of me has been a passion to make martial arts and action films. It was really exciting to be able to fulfil all my fantasies of capturing fun, dance-like martial arts choreography with just the right camera moves to showcase that material, whilst still feeling completely connected to the viewers’ experience. Initially it was going to be a three-minute film, then it blossomed into six minutes. Luckily, I had an incredible producer in Sheridan from Great Guns – who has an amazing eye for detail and not only pushed me and everyone to make the best thing possible but was also completely creatively in sync with everything we wanted the film to be. So many of the wonderful moments in this have come from Sheridan or ‘Pityu’ (István Zorkóczy) over at Digic. It’s been an incredible experience and totally addictive too.”
Great Guns brought animation company Digic on board to help realise the film.
“The process was fairly similar to what it would have been in live action,” he explains. “We made animatics out of our storyboards. Recording the physicality of all the motions for the lead characters in the movie, we then took the mocap and would start to animate to that. I would see bits and pieces as it came into fruition but it wasn’t fed into the game engines. We were able to use some in-game assets as a base but beyond that, everything is pre-rendered and fully CG cinematic.”
The film was unveiled at gaming convention, Tennocon, in Ontario, Canada, on Saturday 6th July.
view more - Creative