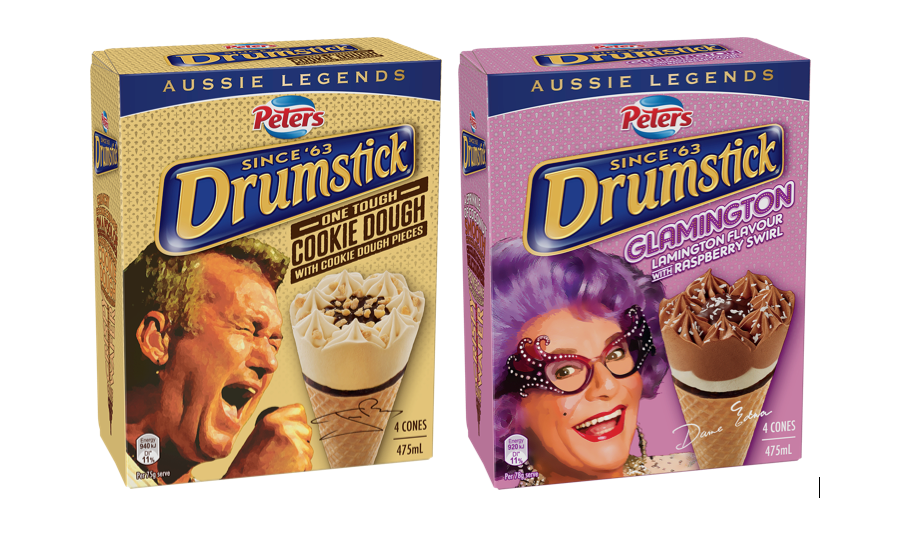 Australia’s favourite ice cream cone, Drumstick, has joined forces with a couple of Aussie legends to celebrate summer and two new flavours; GLAMINGTON and ONE TOUGH COOKIE DOUGH in a new campaign via Leo Burnett Melbourne.

With her signature glasses and lavender coloured hair, the mythic bird of paradise Dame Edna said, "My DRUMSTICK is quite superior I believe.  Cookie Dough is fine for a “Working Class Man” like Jimmy Barnes, but my Glamington ice cream is simply divine. Wrap your lips around THAT Possums!"

ONE TOUGH COOKIE DOUGH has been created in honour of Australia’s legendary Rocker - Jimmy Barnes.

“It’s one hell of an ice cream,” Barnsey said.

“I’m stoked to be working with DRUMSTICK and celebrating Aussie legends and I’m honoured to have been considered as one of them,” Barnsey continued.

The new flavours and the rivalry between Dame Edna and Barnsey on who is the biggest legend has been brought to life in a talk-show style content series which will hit screens in November .

Emma-Jane Collins, sales and marketing director at Peters Ice Cream – the home of DRUMSTICK, said that the brand is delivering huge Aussie flavours to satisfy the big Aussie appetite for life.

“We’re gearing up for a legendary summer with the launch of the our new GLAMINGTON and ONE TOUGH COOKIE DOUGH ice creams, created as a celebration of all those little legends out there,” Collins said.

Both GLAMINGTON and ONE TOUGH COOKIE DOUGH are served in the legendary DRUMSTICK wafer cone with a delicious choc tip.