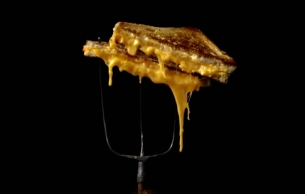 In its first move since partnering with 72andSunny, 106-year-old Tillamook Dairy is going transparent and giving power to the people through its “Dairy Done Right” campaign.

Nothing more punk than that.

In the new TV and online spots from 72andSunny, Tillamook dairy products are set in arresting postures against a minimalist background, as a way of illustrate the simplicity and quality of its ingredients compared to its competitors.

For its Oregon Marionberry Farmstyle Greek Yogurt, a single fist clenches and squeezes the berries as they run juice in a gesture reminiscent of the iconic Raised Fist symbol. The spot for Tillamook’s cheddar cheese shows a block of cheddar cheese being hewed with a hatchet, while another film shows Tillamook’s Caramel Butter Pecan Ice Cream being sawed in half, emphasizing the carton’s surplus of cream.