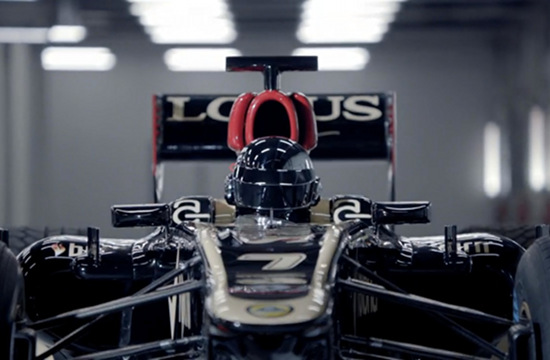 Daft Punk's got the racing world abuzz with brief, cryptic clips of slick helmeted silhouettes and sleek race cars posted all week on the Facebook page of British Formula One racing team Lotus F1.  Today delivered the main event with a :30 second spot directed by Jonas Âkerlund, edited by Christian Larson, and produced by Black Dog Films/RSA (which represents both Âkerlund and Larson) that makes the mystery worth the wait.  The series of videos have baited both racing and Daft Punk fans alike with the suggestion of a collaboration between the two worlds. Electronic music robot legends Daft Punk released their new record Random Access Memories this past week - perfect timing for the lead-up to the world’s most high-profile racing event, the Monaco Grand Prix.

The brilliantly mysterious teasers have had fans going crazy in the way that only Daft Punk news does.  Âkerlund's perfectly doled-out snippets had hearts palpitating – and then, exploding – at the news that the Lotus team will be driving a customized Daft Punk racecar. And with the Grand Prix watched by 100 million people, one's got to wonder what else will come this weekend from what is definitely one of the COOLEST collaborations ever.

As for Lotus F1, with a racecar emblazoned with Daft Punk’s image, how could you not #Getlucky?