Awards and Events 73 Add to collection

Designed by Studio Dumbar, the virtual ceremony will include announcements of the Black Pencil winners, President’s Award and overall rankings 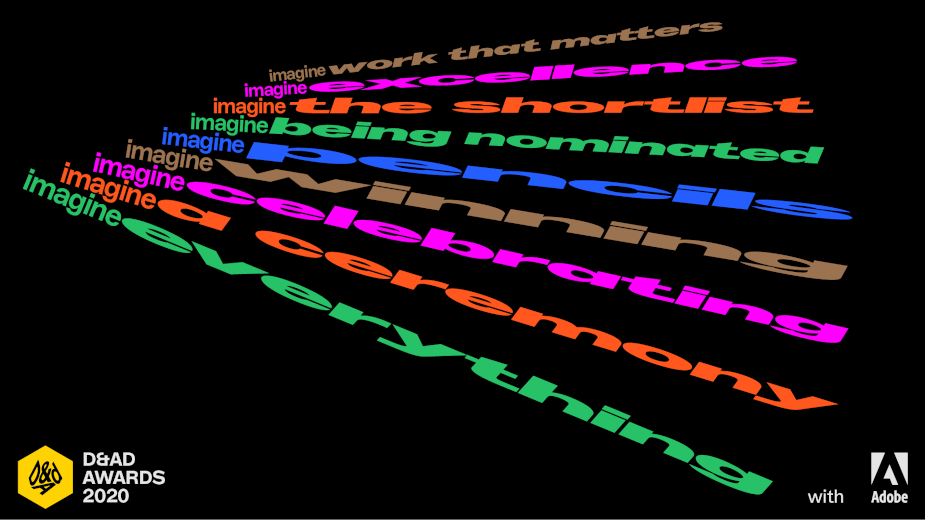 D&AD today announced plans for a virtual ceremony that will celebrate the 2020 D&AD Pencil winners. Taking place on 10th September at 6pm BST and designed by Studio Dumbar, the ceremony will spotlight winning work from the past year in place of the physical ceremony. With the final design categories to be announced, the celebration will also unveil the Black Pencil winners, President’s Award and rankings.

Since 1962, D&AD has stimulated, celebrated and enabled creative excellence and believes it is important to continue commending the exceptional efforts of the global creative community during this period of uncertainty. The virtual ceremony will be an opportunity for the industry to come together and celebrate winning work from the past year and give this year’s creative community the platform it deserves. The ceremony will be presented by D&AD President Kate Stanners and live streamed via the D&AD website. A full schedule will be announced shortly.

The D&AD Awards Ceremony will feature the Graphite and Yellow Pencil winning work across each of the 37 categories, including Book Design, Graphic Design, Magazine & Newspaper Design and Packaging Design, which were delayed due to the critical nature of in-person judging.

Perhaps the most anticipated aspect of the Ceremony is the reveal of the Black Pencil. As the highest accolade that D&AD offers, the Black Pencil is reserved for work that is truly groundbreaking in its field and remains the most coveted award in the creative industries. To celebrate the influence of the Black Pencil, D&AD are running a campaign looking back at the past ten years of the prestigious award and are holding an industry vote for the favourite Black Pencil of the decade. Lasting from 18th August - 1st September via Pinterest, the campaign invites the industry to cast their vote by saving their favourite Black Pencil pin, with the top three most saved pieces of work being announced and screened in the virtual ceremony live stream.

The President’s Award will also be announced during the virtual ceremony. Chosen by the D&AD President, the award honours an industry hero whose contribution has been nothing short of inspirational. D&AD will also unveil the most awarded companies of the year for Advertising, Design, Production, Client and Network from the 2020 awards.

Kate Stanners, D&AD president commented: “The impact of the coronavirus has been hard-felt across the entire creative industries, in particular events-based organisations such as D&AD. Being unable to celebrate the outstanding creative talent exemplified by this year’s winners felt like a disservice to the industry. We hope that the D&AD virtual ceremony will provide a platform to honour and commend the 2020 winners during a time when the power of creative thinking deserves more recognition than ever. By showcasing the highest level of creative excellence, alongside celebrating the legacy of the Black Pencils, we also hope to create a space that stimulates and inspires the future generation of creative practitioners.”

Liza Enebeis, creative director, Studio Dumbar commented: “The design concept and the overall concept of Imagine Everything are one. They are a unity. Virtually anything is possible. The design concept can adapt to any situation or purpose and bring it to life through motion, regardless if it's online or on-stage - or anything else. Imagine Everything marks the start of a new era of experiences.”

D&AD this year continues to platform the most exceptional work from the past 12 months, following the same rigorous judging process that holds creativity to the highest standards. Famously tough to win, there are no quotas for D&AD Awards, meaning that the number of awarded entries fluctuates each year. In some years, no Black Pencils - the highest creative accolade - are awarded. The highest ever awarded in one year currently stands at seven.