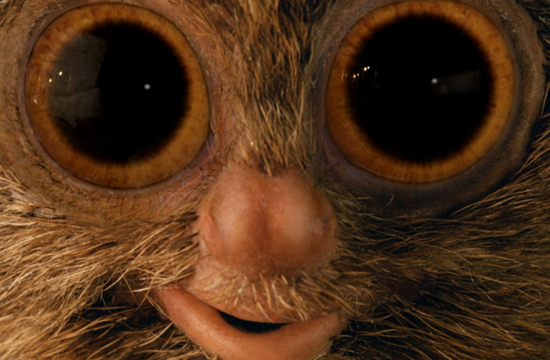 Three 30 second commercials, created by Grey London, feature adorable pups, kittens and one of the planet’s smallest primates, the Tarsier, with the strapline ‘Sweeet’™, to evoke the same feeling and emotional response to that of eating a simple McVitie’s biscuit.

The campaign was inspired by the insight that something as trivial as the humble biscuit can be so powerful and is a deeply embedded ritual habit in our daily lives.

United Biscuits, who are the UK’s number one biscuit baker, says that there were 7 billion biscuit occasions last year in Britain, that’s nearly 1½ times that for confectionery and 40 per cent more than savoury snacks. This equates to 107 occasions per year for every person in the UK. One hundred million McVitie’s biscuits are eaten every day – two packets of McVitie’s biscuits every second (Source: Kantar Consumption Panel). The campaign is, in part, a celebration of the role biccies play in our lives as we share and experience different everyday moments.

The first commercial opens in the living room, with the family about to enjoy a cuppa and a Digestive biscuit. This everyday moment is suddenly transformed when Mum unwraps the packet.  Instead of seeing a Digestive, cuddly Pembroke Corgi pups emerge. The whole family and audience are transported to world of furry cuddles with the pups for a split second before Mum crunches into a Digestive and enjoys that sensation of a crumbly cuddle.

The second opens in a hospital canteen, with three nurses about to enjoy a cuppa and a Chocolate Digestive on their break. As the packet of biscuits is unwrapped, the moment transforms to reveal a series of cute, snuggly British Shorthair kittens. The three friends and the audience are transported to a world of snuggly kittens for a split second, before they crunch into a Chocolate Digestive treat and feel that chocolaty snuggle.

The third and final commercial opens with a teenage boy arriving home, racing past his parents who are sitting in the living room, upstairs to his bedroom.  Sitting on the edge of his bed, he reaches for a packet of Jaffa Cake biscuits. The moment is suddenly transformed, when he opens the packet and out emerges a mischievous looking Tarsier. For a split second, he and the audience are transfixed by the little creature’s huge bright orange eyes before the boy bites into the tangy orange Jaffa Cake and experiences that zesty mischievousness we all recognise.

Created by award-winning director Owen Trevor, each of the three ads is set to a Great British feel-good retro TV show theme tune from Fawlty Towers, Blockbuster and the title track ‘Angela’ for Murder She Wrote.

UB Sweet Biscuits Marketing Director, Sarah Heynen said: “Imagine a world without biscuits. You can’t. There are literally millions of biscuit eating moments in Britain every day.  Biscuits, as a wholesome, baked everyday treat, have been in our lives since the 1830s and the biscuit eating trend continues to grow as we bake new products to add to our heritage range.

“We’re a nation of biscuit lovers with 99.2 per cent of British households purchasing biscuits in a year. This is amongst the highest penetration of any food category. We knew that our biscuits have a surprisingly important place in people’s lives – people relate to them in very emotional way.  We wanted to bring this feeling to life, in a memorable, modern way.”

The first three 30 second adverts will air at 20.45 on ITV1, during Coronation Street. The £12 million campaign runs from 3rd February and will continue throughout the year with the 30-second ads being supported by the biscuit maker’s biggest ever in-store, PR, press and online marketing, including a significant push on McVitie’s social media channels and PR.

Media agency MEC will launch the £12 million campaign digitally with a world exclusive of the creative on the highly successful Jaffa Cakes Facebook page on the 3rd February, followed by the TV launch of the first 30 second ad with a 20.45 roadblock across ITV1, C4, Five, More 4 and E4, led by ITV’s iconic Coronation Street. MEC will also undertake a series of impactful homepage takeovers across the following days on YouTube, MSN and Mail online, as well as an innovative VOD campaign which will allow the consumer to select their favorite ad to view. Activity will be supported by the biscuit maker’s biggest ever in-store, PR, press and online marketing push, including significant activity on McVitie’s social media channels.

Also launching on 3rd February is an all-new mcvities.couk, created by GreyPOSSIBLE, the digital joint venture created by Grey London and POSSIBLE. Features include Release the Snuggles, which sees kittens or puppies turn your screen into their playground all year round and the Site Snuggler, which turns your cursor into a little furry paw.

With buzz and awareness having been built by the TV ads and digital activity, United Biscuit’s biggest ever in-store activation follows a week later in all major multiples, starting with Tesco. Created by Dialogue London, Grey’s sister agency responsible for the strategy, creative and execution of all Shopper activity for the brand, it breaks on 10th Feb and will run over the next 10 weeks. The work is designed to win emotionally with shoppers to drive purchase, and features Sweeet takeovers of the entire biscuit aisle including arches, floor and shelf media.