Awards and Events 483 Add to collection 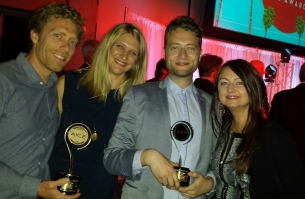 A moody and evocative four-minute film for Volvo from the Swedish ad agency Forsman & Bodenfors, edited by Sam Ostrove of Cut + Run, was named Best in Show at the 2015 AICE Awards, which were held this evening at the Skirball Center for the Performing Arts in Los Angeles.

The spot features a range of Volvo models and shows sweeping scenes of uniquely Swedish life, much of it revolving around the harsh and forbidding landscapes associated with the Nordic country, all edited in perfect syncopation to the song “Vintersaga” from the Swedish singer/songwriter Amanda Bergman.  The film also won the AICE Award in the Automotive category for Ostrove.

To view the winners on the AICE Awards web site, click here.

Editors Graham Chisholm of Married to Giants, Chris Franklin of Big Sky Editorial, Joe Guest of Final Cut, Nadav Kurtz of Cutters and Adam Pertofsky of Rock Paper Scissors each won two AICE Awards.  Chisholm won in the Public Service category for work for Cundari and in Best of Toronto for the Toronto Raptors. Franklin won in the Dialogue / Monologue / Spoken Word category for American Express and in National Campaign for E*Trade.  Guest won in the Montage category for Lurpak and in Storytelling for John Lewis.  Kurtz won in the Online Campaign category (which he shared with Cutters Editor Cameron Yergler) for CVS and in Under 50K for Wingmate.  Pertofsky won in the Fashion / Beauty and Best of Los Angeles categories for his work for Levi’s.

Among companies, entries from the editors at Rock Paper Scissors won the most total AICE Awards; in addition to Pertofsky’s two winners, RPS Editor Damion Clayton won for a Beats by Dr. Dre spot in the Alternative Media – Over :90 category while Editor Biff Butler won in the Best of New York category for work for Adidas.

Cutters editors were recognized with three AICE Awards; in addition to the winners for Kurtz and Yergler, Editor Louis Lyne won in the Best of Detroit category for Ford.

Also earning three AICE Awards were artists from The Mill.  Adam Scott won for the second year in a row in the Color Grading category, this time for Axe White Label, while Lisha Tan and Andrew Proctor won in the Design category for work for the Texas Lottery.  Winning the Visual Effects award were Phil Crowe, Chris Bayol, Robert Sethi, Becky Porter and Jacob Bergman for their work for DirecTV.

Alternative Media :90 and Under

Are You Type E?

CIBC Run For the Cure

Craig Lewandowski, Editor and Partner at Utopic in Chicago, serves on both the AICE Awards committee as well as on the Curatorial Committee for this year’s awards competition. The Curatorial Committee is a group of editors, colorists, effects artists and audio mixers who review the work of the online and live judging panels to ensure that finalists and category winners as selected by the judges are appropriate for and meet the criteria of each category.

“The main comment that kept coming up in the discussions about Best in Show was how, even though this film is four minutes long, there isn’t a wasted frame in it,” Lewandowski said. Overall, he noted, “There were a lot of good conversations among the committee about the category winners,” and he described the support for Ostrove’s entry as “overwhelming.”

The committee also paid close attention to the various craft categories, such as Color Grading, Audio Mix and Sound Design, to make sure the winners in each were outstanding examples of their respective crafts. “Having a great representation from the different crafts on the committee helped insure that those categories were judged appropriately,” Lewandowski noted.

The Awards Committee – which also includes Editors Chris Franklin of Big Sky and Bob Spector of Beast – was also pleased by the number of entries for the debut Original Music category. The winner was Scot Stafford of Pollen Music Group for his work on Google titled “Duet.”

In terms of overall trends, Spector said the presence of traditional thirty-second broadcast TV commercials continued to decline.  “We’ve been noticing this year after year, and it’s a sign of where the industry is headed,” he observed. “More and more of the work we’ve seen in the show reflected extended lengths and different kinds of content that’s never going to be seen on a broadcast network. That’s why it’s so important that we continue to monitor our categories and make sure they reflect the work our members are being asked to deliver. So far, we’ve been on target.”