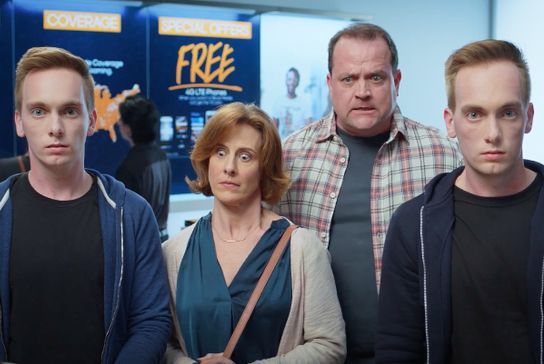 SCS created the campaign tagline “Easy to Switch Easy to Save” which extends to OOH and digital media and asks customers to, “Flip off T-Mobile and Switch on Boost” – a humorous jab that connects to the campaign’s central theme.

The agency also created an in-store physical ‘switch’ brand device that encourages customers to leave their current carrier and set the campaign in the new Boost Mobile stores, building a replica of the brand’s modern, design-forward shops – the first time a Boost spot has been set within their retail store. To round out the strategy, new store employees and comedic appearances by competitor customers who are frustrated by wireless pain points such as network speed, old phones, and paying too much for their wireless come to discover the ‘switch’ at Boost.

With this campaign the brand is shifting their focus from an urban multicultural audience to one that is universal, inviting everyone tired of overpaying for wireless to switch to Boost. SCS captured four days worth of footage, which will be used for a series of spots presented in both English and Spanish.

“With this new campaign we were tasked by Boost Mobile to strongly communicate the brand as the best value in prepaid wireless.” said Jeff Roach, President & Chief Strategy Officer of SCS. “We worked to employ a strategy that would create new brand devices for Boost to do the job: the ‘switch’, helpful store employees, hilariously frustrated customers on the competitors wireless plans, and the Store of the Future retail setting all gave us the theatre needed to make Project Switch an effective creative platform in one of the most competitive business categories in America, prepaid wireless.”

“Our approach to the shoot was to re-create the Store of the Future in a soundstage in Santa Clarita, CA and collaborate with a proven retail comedy director, Chris Hooper” said Zach Lyons, SCS’s founder and chief creative officer. “Over four days, we shot numerous ‘frustrated customers’ against many different wireless pain points to show our consumers that we get it, wireless can be confusing and expensive, and Boost Mobile is the brand best poised to help consumers save money.”