Croisette Chatter: What I Learned at Cannes 2015

From will.i.am to wimminfolks, Laura Swinton looks back on a lively week 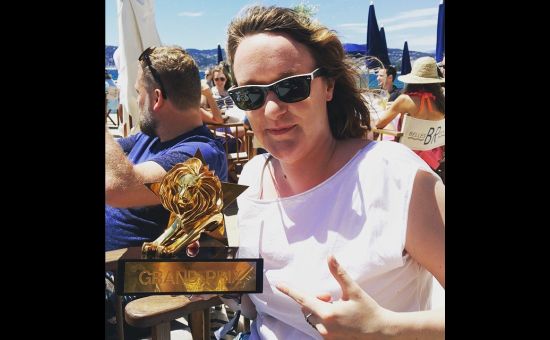 So that’s Cannes done for another year. Eclectic, convivial, creative – and bigger than ever. But what were the moments that stuck with LBB’s Laura Swinton?

will.i.am is a Amazing
Important stuff first: where do you stand on will.i.am? Personally, I’ve never been sure. For me, the biggest take home from last week’s Cannes was a solid answer to that eternal question (I think I have my priorities very much in order, thank you very much). He’s a genius. At The&Partnership and the Wall Street Journal’s debate on Thursday morning (which took place on a yacht, natch), the pop star and tech evangelist held his own against WPP’s Sir Martin Sorrell, Lorraine Twohill, Senior Vice-President of Global Marketing for Google and Will Lewis, CEO of the Wall Street journal and Dow Jones. When he wasn’t explaining that the term millennial was all but useless (we’re all ‘screenagers’ these days, whatever age we are - it's a brilliant term that I predict will have filtered into 75% of all strategy decks in the whole of advertising by this week), he was putting across his vision of media and technology with clarity and eloquence. He even got Martin Sorrell to ‘agree 150 per cent’ – and Sir Martin doesn’t have to agree with anyone he doesn’t want to.
Mr i.am told the audience at the intimate event that ‘if you don’t add value to people’s lives then I don’t really give two shits about your advertising’, explaining that the ‘marketplace’ had been replaced by ‘community’ and that brands had to earn their right to intrude on communities, online and otherwise, by being useful. As the conversation veered into the world of metrics and click fraud and bots and how fake ‘views’ are creating massive challenges for media agencies and platforms, will.i.am chipped in with a quote that cut through the argument.

Check out the highlight video above

He even, at one point, took Sir Martin Sorrell to task for watching his competitors’ discomfort – after all, he argued, the real competition will come from ‘the invisible person coming around the corner’. Schooled.
I’m a convert.

Wimmen, Eh? Advertising Still Can’t Crack that Gender Thing
2015 was supposed to be the year the ad industry figured out that whole gender inequality thingy but the results were, uh, mixed.
It was the year of the inaugural Glass Lion award and the amount of interest and goodwill it generated among everyone I’ve spoken to shows that there is definitely an appetite for change and a desire to use communication to help both women and men escape sexism and transcend gender stereotypes. That, I think, is a Good Thing. And there was certainly lots of high profile work this year that fit the brief – notably Sport England’s This Girl Can, Always’ #LikeAGirl and, of course, the Grand Prix-winning Touch My Pickle from BBDO Mumbai. It was one of the hottest topics of conversation and the volume of opinion pieces we’ve seen around the Glass Lions shows that these issues are penetrating the consciousness of people of all genders, hopefully encouraging people to question their beliefs along the way. I’d love to see it snowball and filter down into more of the day-to-day work coming out of agencies.

And then. And then… it all went a bit downhill, didn’t it? That there are (many, large) pockets of the industry that are still pretty unreconstructed (to put it kindly) is not exactly news but they did seem to be out in force, as ever. The flash point seemed to be the Monica Lewinsky talk – I spoke to one woman who’d had a (male) creative tell her that they could ‘show them why Monica Lewinsky was famous’. Ugh. That was coupled with news that Ms. Lewinsky had been ‘uninvited’ from the VIP box at the award show lest she offend Al Gore’s delicate sensibilities. Way to go. I couldn’t help but think about the amorous couple caught copulating on the steps of the Palais – which partner will go down as a Cannes ‘legend’ and which will be shamed, do we think?

I’ll be honest, a lot of the activities along the Croisette designed to support or celebrate ‘wimmininadvurtizing’ made me feel queasy. Much of it failed, I think  to be relevant or particularly inclusive. Nothing says ‘transcending gender boundaries’ like free blow-dries and nail jobs, amirite girls? If I can’t walk around a sweaty mess of frizz and no makeup in the sweltering heat of Southern France, when the feck can I?

I won't lie, getting your paws on someone else's Grand Prix is lots of fun. And it's brilliant for Instagram. I can see why they're so damned coveted. Let's face it, it's the closest I'm ever going to get to winning one. Thanks to Grey London, Leo Burnett and everyone else who allowed me to get sweaty sunscreen-y fingerprints all over your Lions. FCB Inferno and the team from Sport England told me a brilliant story about being stopped at Nice Airport with a suspicious-looking Glass Lion in their hand luggage... only for the women working security to get incredibly excited to learn that the award was for 'This Girl Can'. It just goes to show, these things really are magical.

Even Cannes Judges Can’t Get Their Heads Round the Categories
Have you ever spoken to someone who is responsible for entering their agency’s work into Cannes? Have you ever looked behind their frozen grimace, into their pained eyes which silently scream, ‘help me…’? Navigating award show categories has long been headache-inducing stuff for entrants, and now it seems the distress has spread to jurors too. Last year I heard a couple of odd comments from judges bemoaning the amount of time spent debating the definition of categories and sub-categories rather than debating the work. But this year it was pretty much all I heard. It’s undeniably tough for award shows to keep up with the constantly shifting industry but it’s also, well, their job. So far the approach appears to be ‘keep adding more categories’ – which can’t hurt the ol’ business model – but at some point in the not too distant future I wouldn’t be surprised if they pull the whole category structure down and rebuild it from scratch.

IT Support
… and no, I’m not talking about the patchy Wi-Fi and 3G across the city. This year truly was the year of the tech giants. It wasn’t just Google, Facebook, Microsoft and Spotify that had a presence this year. Pinterest, Snapchat, WeTransfer, YouTube, LinkedIn were out in force on the beachfront and at the big central hotels. Father of the world wide web, Tim Berners Lee, was in the Palais talking sentience and artificial intelligence. It’s a reflection of the changing industry, and if you can get past the gimmicks and sales people there are some utterly fascinating people to speak to. One of my highlights of the week was meeting Microsoft’s Kati London who is doing some amazing research in the Internet of Things, turning data into usable, empathy-driven services and social.

On the other hand, there were a few noticeable noses out of joint too – not from production companies, who have largely been part of the ‘fringe’ contingent for years now, but from agencies. I suppose you can liken the Croisette to the London property market: rising prices force the middle class hipsters to (*shudder*) suburbia, while the centre is bought up by bazillionaires who construct enormous, empty, edifices. I think the influx of tech giants is a good thing and it shows how relevant creativity and storytelling are that these companies are so keen to be in Cannes… I just wonder if they (or we?) could do a better job of integrating the communities. Maybe the old hands could be a bit more welcoming and open-minded, and maybe the tech companies could be a little savvier and sensitive about the ecosystem they’re entering into?

This Really Is the Friendliest Industry in the World
Advertising people get a lot of flack in wider society. At best they’re seen as soulless alcoholics like Don Draper and the Mad Men crew, at worst, cynical media luvvies and arch-capitalist-manipulators. But that doesn’t reflect the people I met, hung out, partied and celebrated with. Yes, Cannes is work. It’s business. Yes there are a fair number of arseholes who go – but no more than attend, say, Glastonbury. But it’s also kind of like a giant school trip – let loose from Mum and Dad, we all go a little bit giddy knocking about the South of France with our mates. I don’t think I’ve ever gone on holiday where I’ve bumped into someone I know every five minutes. It’s been an absolute joy, as ever, meeting people with whom I’ve emailed for years. And, of course, down at the LBB & Friends Beach we had our own little beach club with a cracking bunch of people.

This year, like every other, I experienced some extreme pre-Cannes fear. It's always a busy week for us and I think, ten months later it's the schedule-juggling and frantic dashing about the place that linger in my mind. As also happens every year, I turned up and it was brilliant.