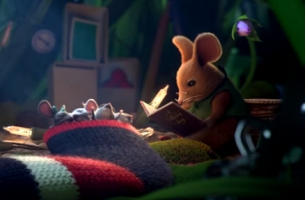 Created by CHI&Partners, No Place Like Home tells the story of British countryside animals in their homes as they hunker down to sleep at night, acknowledging that whoever you are – fuzzy, furry or feathered - your home is your haven.

The campaign aims to bring together all of British Gas’ products and services and is focused on its commitment to helping customers look after their homes.

Margaret Jobling, Director of Brand Marketing, British Gas, said: “This is an ambitious campaign which has given us the opportunity to align multiple internal teams and external agency experts, to tell one story about the best of British Gas.

“Our two recent price cuts are an example of our ongoing commitment to offer competitively priced products. No Place Like Home encompasses this and everything else that British Gas does to ensure we are keeping our customers’ homes warm and working – from leading the nationwide roll-out of smart meters, to launching Hive Active Heating 2 and a range of connected home products.”

The No Place Like Home campaign will primarily feature prime-time, terrestrial TV and radio advertising. It will be amplified on owned social channels and via targeted digital promotion to reach commuters, home movers and those making home improvements.

Sarah Golding, CEO at CHI&Partners, said: “We’re very fond of Planet Home, which has served British Gas well over the years. No Place Like Home is an evolution of this creative, and the charming animation coupled with a poem beautifully communicates how British Gas is helping people look after their homes.

In line with the campaign messaging, British Gas’ Channel 4 sponsorship activity will evolve to focus less on property and more on homes themselves, supporting a strong schedule of prime time programming including Location, Location, Location; Grand Designs and George Clarke’s Amazing Spaces.

Margaret Jobling continued: “We’re incredibly proud of the fact that we provide energy and services to around 11 million homes, but as a brand our challenge has always been how we familiarise people with our products and services beyond energy. For example, many people don’t know that we offer home electrical cover, or that British Gas will provide free insulation to 90% of homes that need it to help lower heating bills.

“The No Place Like Home campaign has been created to drive awareness of all of British Gas’ products and services, and to build on the momentum of the Planet Home creative that we’re known for.”

Plans for a winter campaign with a consistent visual treatment and a continued focus on the home are to be launched this autumn.