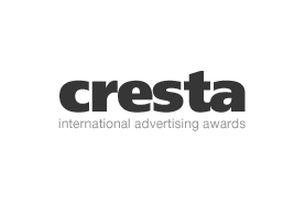 The Cresta Awards, launched in 1993 by Creative Standards International, counted the participation of 53 countries in this year's competition.  A total of 233 ads, campaigns and interactive entries were chosen by 100 plus top creatives for finalist honours.  The juries were held in 7 cities - Beirut, Bratislava, Caracas, Copenhagen, Hamburg, Lisbon and New York.  In addition, a separate pre-selection jury (22 jury members from 11 countries) was conducted for Interactive entries.

All winners were then chosen by Cresta’s International Grand Jury of 84 leading creative professionals from 44 countries.  Of those, 13 countries made the final cut with a total of 74 winning ads (12 TV/Cinema/Online Film; 3 Press; 8 Outdoor; 4 Integrated Campaigns; 3 Ambient Media; 5 Direct Marketing; 1 Radio; 5 Design; 14 Crafts; 3 Promotions & Incentives; 8 Branded Entertainment  and 8 Interactive entries - see attached winners’ list).  Selection criteria were originality of the creative idea and the quality of its execution.  In addition to the 8 GRAND PRIX'S awarded, the remaining breakdown of 'Statue Levels' include 17 GOLD; 14 SILVER and 35 BRONZE Awards.

“With each passing year, Cresta leaves a bigger mark on our industry with an objective, unbiased view of creative excellence with only one focus – to celebrate the best work.  It’s one thing to host an award show and quite another to work with and manage 84 jury members across 44 countries and it’s this wide spectrum of talent across the globe makes Cresta very special. A well-deserved congratulations to all the winners,” said Fadi Yaish, Regional Executive Creative Director, Impact BBDO, Dubai & President of Cresta's Grand Jury.

To select the Agency and Network of the Year, Cresta uses a point system for all 'Winning Statue Levels' as well as points for finalist status.  The point breakdown is:  Grand Prix: 10 points; Gold: 7 points; Silver: 5 points; Bronze: 3 points and Finalist: 1 point.

The Agency of the Year for the fourth year in a row, winning 6 awards (and 59 points) is Forsman & Bodenfors, Gothenburg.  Their winning entries include Three Grand Prix's (Direct Marketing, Integrated Campaigns and Interactive) for their client, IF Insurance, titled, "Slow Down GPS". Client Volvo Trucks, titled, "Look Who's Driving" won the Grand Prix for Branded Entertainment as well as a GOLD award in the Television/Cinema/Online Film competition.  To round off their tally, a BRONZE award in the TV/Cinema/Online Film competition was won for client H&M, titled, "Close the Loop".

Out of the twelve Cresta competitions, entries in eight competitions scored high enough to be awarded the Grand Prix. Continuing this list of Grand Prix winners is Rosapark, Paris who won the Outdoor as well as the Design (Best Offline Digital Design) Grand Prix for their client Thalys Train Network, titled, "Sounds of the City".  An additional GOLD award was captured for "Sounds of the City" in the Crafts competition for Best Art Direction.

McCann Worldgroup became Network of the Year.  In all, 3 entrants from the network combined to win a total of 47 points.  They represent New York, Frankfurt and Birmingham.  Following close behind was BBDO Worldwide with 46 points and Havas Worldwide with 43 points.

McCann New York received Seven Awards and scored a solid 45 points.  Office Depot Office Max, titled, "The Co-Workers Collection" won a GOLD in the Integrated Campaigns competition.   A SILVER statue was achieved for New York Lottery, titled, "#JackpotDrumroll" in the Outdoor competition.  Three additional BRONZE awards were received for New York Lottery:  "Is This You?" scored in the Outdoor competition as well as in the Crafts competition for Best Humor, and "Rich Person Field Guide" won  in the Crafts competition for Best Copywriting.  To round off their tally, two additional BRONZE statues were received for clients:  Tommee Tippee, titled, "Advice Wipes" in the Promotions & Incentives competition and Microsoft, "Peace on 5th" in the Integrated Campaigns competition.

On a single agency basis, winning six awards and scoring 29 points is Åkestam Holst, Stockholm:  1 Radio, 1 Direct Marketing and 1 Promotions & Incentives for 'Refugee Phones',  1 Ambient Media and 1 Outdoor for 'The Swedish Peace and Arbitration Society', and 1 Press for 'Pressbyran'.

On Monday 17 October 2016, Cresta's 'winners gallery' will be released in the form of a micro-site designed for all mobile devices via http://www.cresta-awards.com/2016.