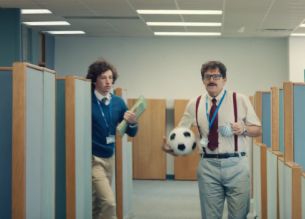 This time the MBNA geeks have been caught up in the buzz around the football frenzy. But instead of them pulling off world class football skills, they mess up. That is until we talk credit cards, when they enthusiastically celebrate their hat-trick of Moneyfacts credit card provider of the year awards.

The work was created by Ant Harris and Dan O’Keeffe, and was directed by Jim Glichrist through Outsider.
“People aren’t naturally interested in finance brands. So we’ve used the hype around the football and disrupted it in a funny, irreverent way by showing how MBNA aren’t good at football but demonstrating their obsessive dedication to being the best at what they do,“ said Fergus McCallum, CEO at TBWA Manchester.