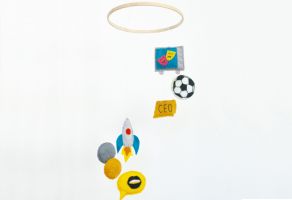 September 26th is the date of the year that most girls are born in the UK, but it has been predicted that women won’t gain equal pay for 217 years.

Creatives Sarah Fox, Jules Middleton and Thorbjorn Kragh have taken a stand against this figure and created ‘What Girls Should Reach For’ mobile for baby girls. The mobile has symbols hanging from it that represent areas where women are still unequal, such as ‘CEO’, football and a rocket.

The project is partnered with Young Women’s Trust, the charity that supports women aged 16-30 struggling to live on low pay, or no pay in England and Wales.

The aim of the project is to encourage parents to support their daughters from a young age to aim high and end inequality sooner, echoing the work Young Women’s Trust does for young girls and women.

Sarah Fox commented: “We knew we wanted to do something on this topic when we found out there are more people called Dave than there are women in the FTSE 100.”

Jules Middleton, adds: "The news around women’s equality can sometimes feel negative so we wanted to do something that put a fun spin on it."

The collective are urging anyone interested in buying the product to get in touch via their website.

Joe Levenson, Director of Communications and Campaigns at Young Women’s Trust, said: “Despite record numbers of women in the workplace, young women are too often told what they can’t be rather than encouraged to be anything they want to. That’s why at Young Women’s Trust we have an unwavering commitment to supporting young women to have equal opportunities in the workplace and why we are so delighted to support this exciting project.”

Thorbjorn Kragh is a creative at advertising agency Grey London. Sarah Fox and Jules Middleton are at BBC Creative.