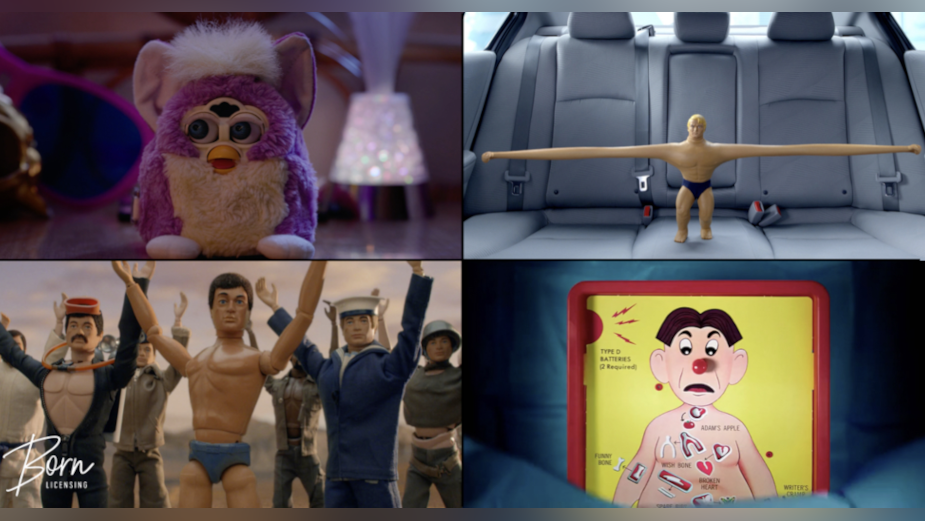 We’re all big kids at heart so it’s not surprising that top brands have been trying to tap into our inner child by using famous toys and games to create playful, fun, and impactful advertising. In this month’s column we look at the different ways advertisers can use toys and games in their work.

But first, why are famous toys and games so powerful as a tool? Nostalgia has a lot to do with it. As Forbes blogger and advertising agency consultant Avi Dan explains, “Nostalgia makes people more susceptible to feeling emotional about brands. Campaigns that reference the past can evoke a relationship, a latent bond that ties childhood to adulthood through products.”  Honda (Masters of the Universe, Care Bears, Teenage Ninja Mutant Turtles), MoneySuperMarket (Masters of the Universe, Action Man, Sindy), Subaru (G.I. Joe), and NatWest (Furby) are just some of the brands who have carefully selected famous toys from the past to resonate with a specific age-group.

A recent spot for NatWest features a 30-something year old living back in their childhood bedroom, filled with props from the 90s such as lava lamps, boyband posters, and fluffy pens. In one scene the hero of the spot, Lillie, explains that living back at home with her boyfriend isn’t great for romance…the spot then cuts to a Furby staring at the camera. The creative agency behind the spot, The&Partnership, could have chosen any generic toy for this shot but saw the value in licensing a famous recognisable toy that would help the spot stand out to their target audience.

Nostalgia is something that we all engage with regardless of age. Media agency, the7stars published a whitepaper in 2019 with YouGov investigating Britain’s relationship with nostalgia focusing on the use of nostalgia as a marketing tool. They discovered that “while people are more likely to reminisce as they get older, younger generations are highly likely to spend at least some time thinking fondly of the past. In fact, millennials are the generation most likely to ‘almost always’ do so”. According to their research only 7% of the British public never reminisce highlighting the mass potential for using nostalgia as a marketing tool.

And that research was carried out before the pandemic! Many have observed that nostalgia has since become an even more potent tool in advertising. As Avi Dan writes, “In a time of anxiety, such as the present climate, people are seeking out brands they’re comfortable with and they can trust.”  Similarly, it’s no coincidence that according to Abha Bhattarai, retail reporter for The Washington Post, classic toys are making a comeback during the pandemic: “whether it’s a yearning for nostalgia or simply a desire to get kids to put down their tablets, parents are reaching for old favourites like Tonka, Hot Wheels and Play-Doh.” And it’s not just kids who are picking up these classic toys. As Bhattarai also points out, “Lego has set its sight on a growing market: stressed-out adults”. The already established trend of colouring-in books, puzzles, board games, and now LEGO for adults as outlets for mindfulness has been further driven by the pandemic, giving marketers even greater reason to use toys in their advertising.

Although not the primary objective, the below spot by McCann for Microsoft Teams, captured some of the comfort families in lockdown sought by coming together to enjoy the classic boardgame Monopoly. The main purpose of the spot was to show how teams such as Hasbro’s designers, adapted to the pandemic by conducting consumer research via Teams.

One of our favourite examples of a brand using toys in their advertising is Honda’s series of Christmas adverts that featured a range of famous toys from the 80’s such as He-Man, Skeletor, Stretch Armstrong, Care Bears, and the Teenage Mutant Ninja Turtles. TV spots were supported by social campaigns including Skeletor ‘hacking’ Honda’s twitter account. As Avi Dan writes, “Although nostalgia can be a powerful tool anytime, there are certain occasions where it may be especially effective. There are times of year that already have consumers in a nostalgic mood – think Christmas, the 4th of July, back to school season, etc. This is the time to indulge your audience who is already craving that nostalgia fix.” The Honda spot starring Hasbro toy Stretch Armstrong opens with him saying “Hey, I’m Stretch Armstrong. Remember how pumped you were when you got me for the holidays? You tried to pull my arms off?” These Honda ads have double the nostalgia by appealing to our happy memories of receiving toys at Christmas.

Of course, toys aren’t the only effective throwbacks to the past. The 7Stars’s white paper concludes that “For Brits, music is the number one cultural association across all decades”. Catie Dear, Entertainment Client Lead at the7Stars describes music as ‘the emotional connective tissue between generations: those who lived in a specific time and place, and those who wish they did”. This ability to appeal to multiple generations can be crucial for some marketers. Whilst not always comparable to music, there are many evergreen toy franchises that are also recognised across all age groups. Mr. Potato Head next year celebrates 70 years and thanks to starring roles in Toy Story plus a strong product line that has kept current, it has managed to remain an icon in the toy world. Barbie is another example of a toy brand still going strong after over 60 years. The ‘Out of Con-Troll’ spot by McCann for eBay perfectly demonstrates the evolution of an iconic toy brand that has remained current and popular with today’s kids through new content such as the Trolls film franchise by Dreamworks Animation.

Many brands would typically turn to celebrity talent when looking for a ‘face’ to front a campaign. When Gal Gadot posted her now infamous video of her and her famous friends in mansions singing ‘Imagine’ the backlash was instant with everyone from the BBC to Huffington Post and The New York Times questioning if the age of celebrity was over. It was observed that celebrities had become out of touch, irrelevant, and just a little bit annoying. Whilst we don’t agree with this assessment it is fair to say that toy characters could be a much more fun and surprising alternative for a brand. It’s interesting that categories such as the automotive industry, traditionally famous for using celebrities in campaigns (recent examples include Jeep x Bruce Springsteen, David Beckham x Maserati) have been known to buck the celebrity trend using toys to inject some fun into the category. In addition to Honda using toys from the 80’s, Subaru’s ‘Think Out of the Box’ campaign in Australia featured toy action hero G.I. Joe living life to the max.

In terms of production, using toy characters instead of celebrity talent can also be much cost effective not to mention less risk (Jeep Reinstates Bruce Springsteen Super Bowl Ad after DUI Charge is Dismissed). Licensing fees will typically be more affordable than A-list talent and you will have much more options in terms of when and where you shoot. You also won’t have to worry about expensive riders!

As the above examples have shown, toys and games can be featured in campaigns in a variety of ways including bringing toys to life through Stop Motion or CGI as we did with Action Man and Sindy for MoneySuperMarket.

Classic games are another great tool available for advertisers who could incorporate scripts around competitive players as Uber did with Patrick Stewart and Mark Hamill in an intense game of Connect 4.

We also love this example by Brownstein for Inspira Health which features the classic game OPERATION:

In summary, there’s endless fun to be had with playful advertising using classic games and toys. The licensing process is the same as the licensing process for TV and Film characters – and as shown by the many examples – Rights Holders can be open to different approaches in production, opening up endless possibilities for unique and imaginative creative.