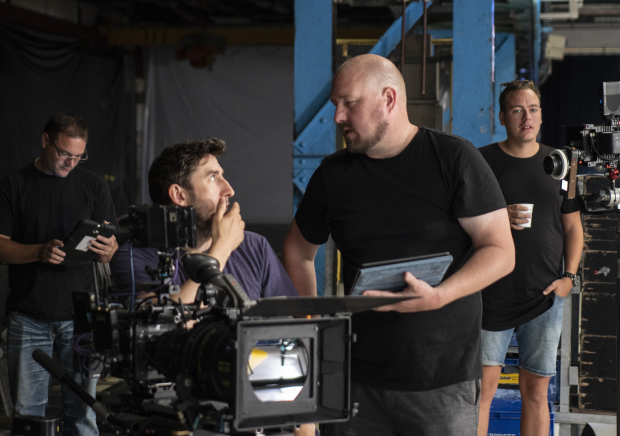 Following the recent release of KIA Netherlands' spot '7 Years in 7 Seconds', the directorial trio Rüdiger Kaltenhäuser, Darren Macpherson and Kyle Obley take us behind the scenes to give us some insight into how this playful spot was made.

Q> How long did the project take once Glassworks were involved?

Kyle> From initial pitch to final delivery was under three months. We planned everything out in pre-viz, which helped streamline the shoot and allowed us to plan the VFX needs well in advance. It also helped speed up the offline process as we knew timings even before loading in the rushes. The schedule also allowed for some breathing room in the final week, which gave us time to refine comps and finesse the last of the CGI before delivery.

Q> Can you walk us through the different stages of the project before and after the shoot?

Darren> When we were approached to pitch on the project, we started things off with some initial ideas, concept art and visual references.

After the project was awarded, we began the process of dissecting the script and finding the key moments that really showcased what a car would go through over a 7 year period. We knuckled down and began storyboarding the script, exploring camera angles, ideas and the most exciting way to show the story in 7 seconds but also, what would then work for the story and flow once everything slowed down to focus on the various parts of the story.

Alongside storyboarding, we began to further refine the concept art and design of the bespoke elements we needed to add into the various scenarios. These designs would serve as the basis for various props that would be created practically as well as in CG.

Once the storyboard was locked the team began work on the layout and animatic for the commercial. This was a critical stage in the process as it was the blueprint for what we would shoot in live action and where elements would be added in CG. During this process we worked out the timing, angles and lenses that would then be propagated on the live action shoot. We handed off designs to the art department to begin work on the practical props and features.

The shoot ran over two days and it was a tight schedule to get all the shots we needed. We knew that there would be shots where we needed to render the car in CG so we made sure to capture as much data as we could; HDRI's, colour charts, chrome and greyballs. Even though the car was replaced with CG in nearly ever shot, it served as a great reference for the lighting and matching the details seamlessly.

Once we wrapped the shoot, the offline process was pretty straight forward since each shot was based on the animatic. We found the best selects and tightened the edit to make sure we had a good flow. As the CG assets were already being created prior to shooting, we were able to get up and running on the production, animation and integration as soon as we had plates from the locked cut.

Having the full production in house at Glassworks allowed us to have all departments involved in the project; design and concept, 2D and 3D, through to finishing in grade.

Q> What areas of research did you take on for this project?

Ru> We looked at a lot of real car testing facilities to give this film believability... at least at the start anyway. We wanted it to feel like a real place that could house such intensive testing, even the result was a bit more fantastical.

We looked at the way rain, climate and suspension testing would be done and then combined it all into one clear symmetrical lab setup. It was important for us that for every testing sequence we have easily identifiable machinery that is present throughout the story. This added level of detail helped ground the combination of CG with the real warehouse environment.

Q> Can you explain some of the design process?

Ru> For the look of the film we wanted to achieve a mix between industrial test lab and quirky art installation. The idea was to make all the test machines, including the more ridiculous ones like the dog, feel convincing and not overly designed. They were supposed to look like they were built for the purpose of testing and not to look sci-fi or stylish. We looked at a lot of real testing devices like car- and furniture-stress-testing machines and took the way they were built and the materials that were used as reference for our machines.

To make the film fun and playful we choose a colour pallet with a light grey as foundation and added primary colours for the machines to make them pop. This gave the film a playful, fun look and also paid tribute to the primary coloured steel often found in modern industrial facilities.

Q> What techniques were used on the shoot?

Kyle> The shoot was fairly straightforward, utilising standard techniques and tools. Once again, the pre-viz was especially helpful in lining up shots and assessing real world dimensions and camera moves well in advance. The ‘7 Seconds’ shot was the most technically challenging, with a seamless camera move along a section of track. The track length and curvature we wanted ended up not being available to source for our shoot, but we pivoted and revised the move in CG to allow for a slightly tighter curve on set. Having access to the 3D scenes while scouting, pre-light, and even on shoot days gave us extra confidence as directors and VFX artists to capture all shots as intended.

Q> Where did the shoot take place?

Kyle> We shot in a really great industrial warehouse in the North of Amsterdam. The location gave us the scale and legitimacy we were looking for with our ‘technical testing’ environment. We did not want something that felt clinical and also appreciated the colourful paint within the structure. It worked really well with the tone of the film and was conveniently just a short bike ride for our local Glassworks crew.

Darren> We used Maya and Houdini for the CG elements and rendered with redshift. Nuke and Flame were used for comp and the film was graded in Baselight.

Q> What was the toughest creative challenge?

Ru> One of the biggest challenges was taking all the individual scenes we wanted to show and putting them into one single logical environment. Then, putting them into an order to create a storyline that naturally flows from one scene to the next was the next trick. It was important for us to have the camera travel in a natural way while keeping it interesting for the viewer.

Q> What was the toughest technical challenge?

Kyle> The toughest technical challenge came in the ‘7 Seconds’ shot. We knew we would have to fully replace the car in CG and incorporate a variety of VFX into one single take. As we weren’t working with motion control, we also had to get creative with capturing the lighting changes from day to night for the traffic simulator element and head and tail lights. We ended up doing a significant amount of reprojection in Nuke to combine the limited plates and passes we captured on set.

Q> How did it help working as a trio of directors?

Darren> It can be a delicate balance with multiple directors sometimes, but on this project there was a clear idea and road map from the beginning of what everyone wanted to achieve. This came from the upfront planning and visual direction in the early stages. It helps that we were able to be involved so early in the project and have everyone on board even from the concepting stages. Since we were not only directing the commercial but also working on shots and taking it to the finish line, it was great to be able to have input from each other and not feel like you're an island on days where you might feel overwhelmed from wearing different hats. It also helped with making sure we were hitting the mark with details and pushing it to the highest quality that we could. We’re used to working together on projects in a traditional post pipeline and really enjoy having the additional influence on the look and final result when leading the way creatively.