Creative agency Ponderosa is responsible for the sponsorship idents 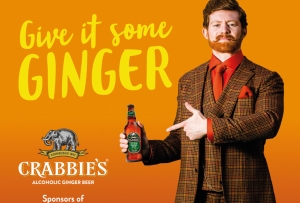 The seven figure partnership, including off-air activation, will run for the duration of the ten episode series which launches at 8pm, Friday 16th October 2015.

Creative agency Ponderosa is responsible for the sponsorship idents. The live action 15 second spots feature a charismatically charming, smoothly stylish and effortlessly eccentric Crabbie’s character who will be bringing Crabbie’s new marketing campaign, Give it Some Ginger, to life by turning seemingly inanimate objects, people and animals ginger.

Content for the idents will be generated by the Crabbie’s fan base who have been asked to submit their own suggestions to be ‘gingered'.

The new partnership was negotiated by Jane Hector-Jones, Channel 4’s Group Partnerships Manager within its regional Sales operation based in Manchester and Charlotte Dearsley, Head of TV Strategy, Broadcast Investment at Mediacom Manchester.

Claire Kelly, Marketing Controller, Crabbie’s said: “The sponsorship of TFI Friday is an excellent opportunity for Crabbie's Alcoholic Ginger Beer and is a perfect fit.  To be involved with such an iconic show, that engages with the great British public and is so closely aligned with the Crabbie’s brand personality, is something we are all very excited about.”

The hugely popular show returns at a key period in the year for the client and their campaign's entertaining creative combined with innovative off screen activation make for an exciting new partnership."

Charlotte Dearsley, Head of TV Strategy at Mediacom said: “TFI Friday is already shaping up to be one of the most hotly anticipated shows of the year, putting Crabbie’s in the perfect position to capitalise on all the buzz and brilliance of the return of one of the most iconic British chat shows of all time. With a full licensing package including in store, on trade and competitions, Crabbie’s on screen association with TFI Friday will form the centrepiece of what will be an extremely hard-working and wide-reaching deal.”

Channel 4 Sales in Manchester are responsible for UK agency and client relationships outside of the South East of England.