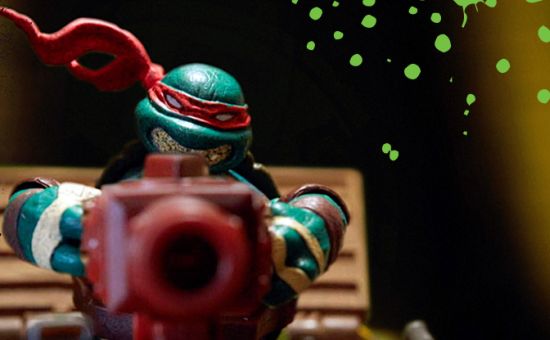 Remember playing with action figures: the excitement, the sound effects and the boundless storylines? Now, imagine being immersed – a story so action-packed and suspenseful that only a kid at play could have dreamt it up. Every flip, flying side kick, and fan favourite character is frozen in time and space around you, allowing you to move through the battle, and discover each moment in incredible, interactive detail.

Welcome to TMNT City Under Siege, a Canadian-led multi-platform content experience from Nickelodeon, in partnership with Isobar Canada, coinciding with the Season 4 TV premiere and new themes to support the launch of the latest line of Teenage Mutant Ninja Turtles toys.

“Our goal was to deliver immersive, exclusive content that would engage both parents and children alike. We envisioned episodic, short-form content that would bring the action figures, vehicles, and strong storytelling of our franchise to life for our biggest fans,” said Tanya Visano, Senior Director, Consumer Products Nickelodeon Canada.

Typically, the holiday shopping experience has kids pleading with parents for the newest toy to hit shelves, but with a franchise as iconic and memorable as Teenage Mutant Ninja Turtles, they took the opportunity to bring to life the iconic world of TMNT through the breadth of over 100 action figures made available since Nickelodeon launched the franchise in 2012.

Using Teenage Mutant Ninja Turtle action figures, the campaign presents a four-part interactive film series housed on CityUnderSiege.ca — inviting fans to fly through the sets, and watch the four beloved Turtles suspended in frozen battle scenes against an onslaught of familiar foes. Essentially, fans try before they buy; observing the nuanced methods that kids often use to tell stories through play. Subtle hotspots over each action figure let fans delve deeper into the background of each character, including their allegiance, combat style, and history, and provides a link to buy the toy online.

“Exploring brand commerce in a thrilling digital landscape allows parents to visualize the perceived value for their child. Sometimes we dismiss the educational merit of toys, but they can be an essential tool for developing problem solving and storytelling skills,” explains Kai Exos, Chief Creative Officer, Isobar Canada.

Isobar Canada collaborated with award-winning motion production studio, Spot Cinema, to hand-craft four toy-scaled sets so detailed they look as though they’re straight from a kid’s imagination. Spanning the Turtle’s sewer lair, the city streets, the New York skyline, and Dimension X, these intricate sets are the stage for an epic Teenage Mutant Ninja Turtles battle like no other. As true testament to fans, sets were designed with immense detail to bridge the gap between the popular animated Nick series that inspired the toys, and the real world they occupy.

“The opportunity to excite an audience is limited with a traditional TV spot. With City Under Siege, we’re able to create an interactive narrative that engages fans, allowing them to view a unique piece of content and dig deeper into character story lines,” added Steve Di Lorenzo, Executive Creative Director at Isobar Canada.

An accompanying online contest places gamers and fans of the Nick series in familiar territory, challenging them to find a hidden Easter egg character in each of the four chapters for the chance to win TMNT action figure prize packs.

To see Chapter 1 of the new Nickelodeon “TMNT City Under Siege” interactive series, and enter for your chance to win select products from the new collection, visit CityUnderSiege.ca.