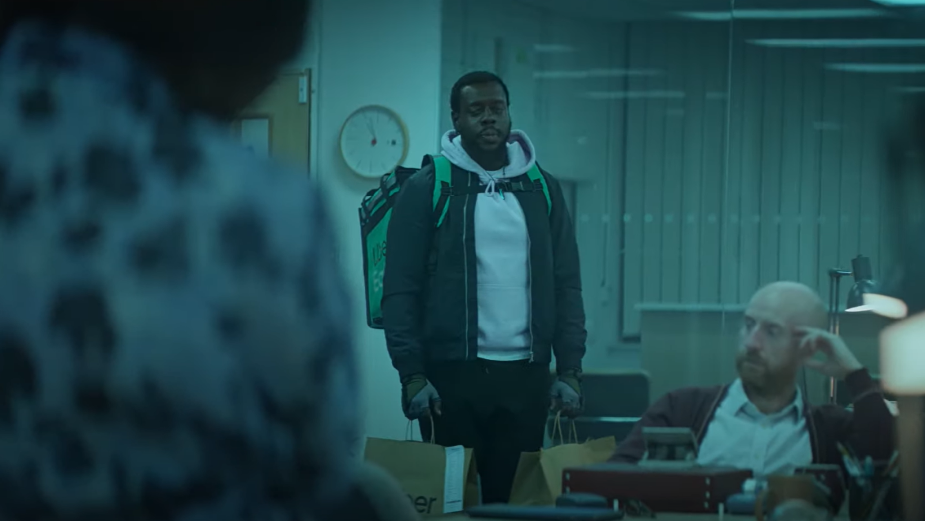 Uber Eats is returning with a third instalment of the ‘Bring It’ campaign. This time with a new lovable courier who is here to dish out some much-needed motivation with a twist.

Ekow Quartey follows in the bike tracks of Guz Khan and Kadiff Kirwin as our courier, this time stepping into the role of coach. In the films, he arrives in peoples moments of need and delivers motivational speeches, with a twist; his rousing pep talks only mention their favourite food items.

In the first film to launch, Project Team, Ekow is greeted by late-night office workers in a slump. Seeing their exhaustion, he paces the room, listing off their food order and rallying the team back together with a cry of ‘EDAMAME BEANS’.

Each of the films taps into a familiar low moment. In ‘Hangover’ a group of friends, slumped on their sofas, are brought back to life with the rallying cry of KFC. In ‘Football’ a crowd of downtrodden supporters are given a halftime pep talk with the help of McDonalds and in a fourth film (set to be released later in the year) we meet a family at the end of a long day of moving house.

The music in the films taken from the film score of the 1999 film ‘Any Given Sunday’. The composition originally underpinned the scene of Al Pacino’s famous ‘Inch by Inch’ speech - and Paul Kelly recomposed it for each of these films, giving them a rousing and filmic tone.

In his performances, Ekow draws inspiration from an array of great rousing speeches from cinema, politics and sport - where the right words, delivered in the right way, at the right time are able to change the course of a plotline, shift the paradigm or change the tide in a vital game.

Launching on TV and VOD, quickly followed by OOH and a plethora of digital and social assets - our courier, Ekow, features alongside delicious food shots from a wide selection of some of the UK’s most-loved restaurants. Targeted digital and social assets aim to speak to people’s mindsets in specific moments when they might need a lift - and in OOH we carry the motivational tone through into more playful lines of copy.

Maya Gallego Spiers, head of marketing UK at Uber Eats commented: “After what has been a tough 18 months for everyone, we wanted to celebrate the resilience of the Great British public and the role of a great food delivery to lift your spirits. Our latest ‘Bring It’ campaign focuses on the power of food to help pick you up, lift your mood and give you the energy to persevere. Whatever the week throws at you, Uber Eats are always there.”

The films are directed by Mike Warzin, recognised for his work on Nike, KFC, Google and Bud Light in the US. This is his UK directorial debut through production company Arts & Sciences, which launched in the UK this year.