Could You Beat Dalí in a Staring Contest?

Goodby, Silverstein & Partners app for The Dalí Museum pits you against numerous characters 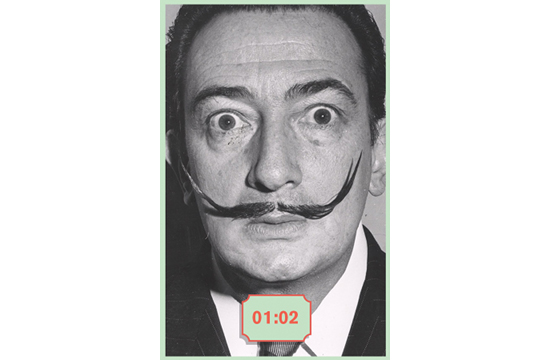 What if surrealist artist Salvador Dalí created an app? How could the app capture contradictory conditions between the real and the subconscious?

"The Dalí Staring Contest" app does just that by turning a two-person game into a digital one that gives users only the illusion of having an actual opponent.

The app is a joint effort between The Dalí Museum and advertising agency Goodby Silverstein & Partners.

Through the Staring Contest app, players pick their battles against Dalí himself and other felicitous characters, such as a proxy for Andy Warhol and other surprise visitors yet to come, in celebration of the launch of The Dalí Museum’s new Warhol exhibit. The punch line is that these opponents are all still images, only showing movement in unexpected distractions like a sly wiggle of Dalí’s moustache.

“You think you can outstare Salvador Dalí or a soup can? This fascinating app actually reminds you of The Dalí Museum’s Warhol exhibition that just opened every time you pull it out. It’s a great cause and a hilarious solution, I think,” said Jeff Goodby, co-chairman and co-founder of Goodby Silverstein & Partners.

The Staring Contest app is launching now in part to promote the exhibit Warhol: Art. Fame. Mortality., which considers Warhol’s little-commented-on engagement with other artists through his own painting, how he constructed an approach to his image in terms of celebrity and fame, and his treatment of painting and image in terms of human mortality. The exhibit runs from January 18 to April 27, 2014.

“We’re always looking for ways to engage museum visitors and believe this app will really connect with our audience. Everything we do here at The Dalí Museum is intended to reflect or in some cases magnify the works and personality of Dalí himself. As a barometer, we speculate whether Dalí would like what we’re doing, and the Staring Contest app is one I’m confident he would enjoy,” said Hank Hine, executive director of The Dalí Museum.

The app complements The Dalí Museum’s new cross-platform advertising campaign – which highlights the Warhol exhibit – and will carry its own mini marketing campaign including a :30 promo video online and a two hour promo video spoof on the unbeatable contest. Mirror decals (“You vs. You”) will also be displayed on The Museum’s bathroom mirrors.

Goodby Silverstein & Partners and The Dalí Museum had worked together before, creating the award-winning Hipstamatic app, which made surrealist overlays on photos taken through the app.