Could This Be the Sequel to the Famous Windows 'Bliss' Wallpaper? 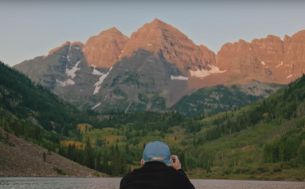 In the mid '90s, photographer Chuck O'Rear pulled his car aside somewhere along the Sonoma Highway to take one of the world’s most iconic pictures – Bliss – the default computer wallpaper of Microsoft's Windows XP operating system. Twenty-one years later, creative agency House of Radon launches 'New Angles of America for Lufthansa', a sequel where Chuck brings the next generation of wallpapers to life.

“I am turning seventy-six and realise how much the Microsoft 'Bliss' photograph has meant to my life. As the photographer of the most viewed photo in history, I have enjoyed every minute of the fame. Likewise, I am thrilled to create for Lufthansa a sequel to the ‘Bliss’ photo on smartphones so that my views of other beautiful places can continue to be enjoyed by millions of people. After all, smartphones have become the primary place for the world to see new and interesting photography. And, I’m glad to be part of it,” says Chuck O'Rear.

Despite O'Rears extensive career, with countless assignments for National Geographic and other high profiled magazines, Bliss will probably be his most remembered achievement. In fact, Bliss has been claimed to be the most viewed photograph in the world.

New Angles of America covers three unique destinations in North America. The photos can be seen and downloaded for free here.

“Lufthansa always thrives to inspire travel in people’s everyday lives, and this campaign really captures that, said Kristina Öström, Head of Marketing EMEA, Lufthansa Group. “The American landscape has so many beautiful scenic places, that our biggest challenge was deciding on just three locations to photograph. Together with our partner United we were able to travel easily to all these beautiful regions we want our customers to discover, which will become more famous through Chuck’s pictures.”