Additions to the roster bring comedy, cinematic storytelling and quirky humor to the company, along with post production capability 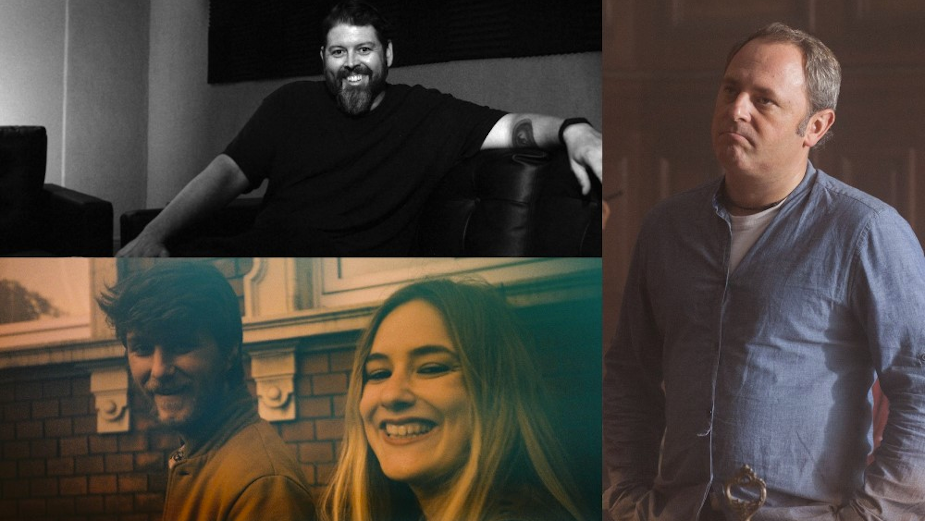 The Cortez Brothers, Inc., the multicultural, woman-owned production company based here, has announced the addition of three unique talents to its roster that significantly expand the company’s capabilities and creative resources.

Joining is director Doug Cox, who comes on board for representation in the US outside of the San Francisco market, where he continues to direct and edit through his own studio, The Cabinet. Also joining are director Ed Vieitez and the directing team of Stefano & Alejandra.

The signings represent the first national representation deal for Cox as a director, and the first US repping agreements for Vieitez and Stefano & Alejandro.

Vieitez (at right in the photo above) is a former agency creative based in London who’s currently handled by Go East Productions in Europe. His work, which has a lush, cinematic quality to it, includes spots for such brands as McDonald’s, Samsung, Durex, Braun and the Canary Islands Tourism Board. To view his reel, go here.

Stefano Caprile and Alejandra Cano, aka Stefano & Alejandra, are known their quirky and eclectic style. Visual stylists who infuse their work with a light touch and a sense of humor, they’ve directed for such brands as Vodafone, Schweppes, ING Bank, Apple Pay and Shell. They’re repped by Lee Films in Spain, Hobby Film in the UK, Love Boat in France, DA Agency in Eastern Europe and Cartello Directors in Asia. To view their work, go here.

Cox’s signing adds a dimension of comedy direction to the Cortez Brothers roster. He began his career on the agency side at Publicis & Hal Riney in San Francisco, directing, editing and producing content, before launching The Cabinet with former Riney Head of Production David Verhoef. As a director, his reel includes work for such brands as Diamond Almond, Method Men and Splunk, among others. To view his work, go here.

“Doug is going to fit in nicely here at Cortez,” says Managing Director Ed Rivero of the Cox addition. “We’ve always been interested in having a great comedy director, and Doug’s work is guaranteed to make you smile – and we can all use more of that these days. His skill as an editor informs his work as a director, too, and he benefits greatly from his experience being on the agency side.”

Cox was introduced to Rivero by a mutual industry friend. “And through various conversations we discovered that I fit into several really attractive profiles within his company,” he says. “Also, our operation in San Francisco offers post, which has been a great option for agencies and brands looking for that ‘all in’ bid.

“Cortez is an amazing operation,” Cox continues. “They’re known, relevant and aware. And that’s important to me. They needed a comedy guy and someone with my back-ground who can address post production as well. What I hope to achieve in signing with them is, in a word, ‘reach’ – to get my work outside the market that I already know here in the Bay Area. I look forward to bringing my brand of funny to their already amazing roster of directors.”

Rivero says the addition of Vieitez and Stefano & Alejandra were a natural move for the company, which is always scouting new and established talents from around the world. “Ed Vieitez’s reel blew me away; it was love at first spot,” Rivero explains, “while our interest in Stefano & Alejandra was more organic, as I’ve been following them since 2016. We’re thrilled to have all of them joining us at Cortez.”

The addition of these directors caps a busy spring for Cortez Brothers. Working with the agency GUT, director ENKRYPT produced a short film for the Mexican brewer Estrella Jalisco that teamed up with LGBTQ+ mariachi band Mariachi Arcoiris to explore evolving views on gender identity and sexual orientation within the Hispanic community. Cortez director Dan Addelson just wrapped jobs for the US Air Force out of GSD&M and the OTC brand Mucinex for McCann, while director Jerome Kruin just shot for Honda out of RPA.

"We’re in an expansion mode for sure,” says Cortez Brothers President & Executive Producer Bernadette Rivero. “We’ve been looking to round out our roster to respond to the massive increase in inquiries we’ve had over the last few months. There’s a real flood of creativity coming out of agencies and brands at the moment, and we’re eager to present our talent for these opportunities.”