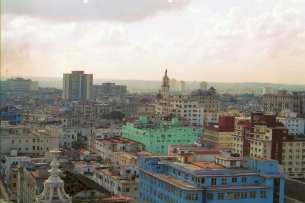 With the doors to Cuba now flung wide open, American film producers, ad agencies and other content creators are rushing to explore this untapped Caribbean nation that for so long has been so close and yet so far.  And to make their entry to Cuba more efficient and seamless, the country’s top production service company, Shoot Cuba, now has an outpost in the US. Headed by veteran Executive Producer Ed Rivero, Shoot Cuba is open for business, just in time for President Obama’s historic visit to the country later this month.

A native Cuban, Rivero has been traveling there for the past 15 years and knows the country well. During this time he’s been building relationships with key people, among them Luis Lago, Executive Producer of Shoot Cuba, which is the oldest production service company on the island.

As part of their agreement, Shoot Cuba will serve as the Cuban base for Cortez Brothers, the production company Rivero founded in 2006, which specializes in the crossover between the general market and the Hispanic market and has shot for agencies and brands throughout Central and South America as well as across the US.

Rivero and Lago have a mutual contact that helped pave the way for their connection. Producer Asori Soto, a protégé of Lago, also worked for Rivero for a number of years in the US. “Asori’s history with Luis is one of the big reasons I sought him out,” says Rivero. “I realized that Luis had similar experiences as I’ve had, and that he worked at a level that paralleled what we’ve been doing in the States.”

Rivero brings an extensive background in advertising production to the Shoot Cuba relationship. He’s lived and worked in New York, L.A. and Florida, and worked on general market campaign at RSA Films before launching Cortez Bros. He’s also spent time on the client side, where he was the Hispanic agency liaison for M&M Mars, dealing with creative and production teams at both general market and specialty agencies as well as with production companies.

Rivero says one of his goals with Shoot Cuba will be to help beef up its infrastructure in Cuba, so that it can handle multiple shoots at any given time. “With the relaxation on imports, we’ll be bringing in quite a bit of gear to bolster Luis and his crews,” Rivero points out.

Not that Lago hasn’t been working with some of the top production companies in the business already: Shoot Cuba has handled production service for shoots by Sonny London for Mother and Stella Artois, directed by Fredrik Bond, as well as for M&C Saatchi for Havana Club, also directed by Bond. RSA director Adrian Moat has worked with Shoot Cuba as well, as has Knucklehead director Rob Leggatt on a shoot for Havas and Unilever.

Rivero is also involved in long-form production. For example, Cortez Brothers produced a popular cooking series focused on Mexican cuisine that airs on PBS stations around the country. He and Lago are shopping around a script that Lago wrote for a feature film about the American presence at Guantanamo Bay, while he and Soto have partnered on the production of a feature documentary titled “Cuban Food Stories” that will provide viewers with a rich overview of Cuban food, society and culture. This project has its own Kickstarter campaign, which can be viewed here.

Everything about Rivero’s involvement with Shoot Cuba is designed to take advantage of this unique moment in time, when there’s tremendous curiosity in the US about what Cuba has to offer. For the production and creative community, it presents a kind of virgin territory that’s not been widely seen or experienced by American writers, directors or producers.

“Cuba is a nearby destination where you can find the kind of locales you can’t find in the US,” explains Lago. “Usually when it comes to Cuba people think of tropical beaches, but we’ve been able to find locations here that have substituted for the French Riviera or Paris, even for New York City. I’m working on a project right now that’s using parts of Havana to portray New York in the ‘60s and ‘70s.”

Working in Cuba is less expensive, Lago points out, while providing producers access to a population that’s ethnically and racially diverse. “And we have professional people in all our departments who can support large-scale productions,” he says.

As for the new relationship between the US and Cuba, Lago is nothing sort of ecstatic. “Barack Obama’s visit will be the first by an American president in 80 years,” he beams. “For the film business here, this will be a great development. We expect there will be lots of interest from Americans, and we’re ready to work with them. We just need the opportunity.”