Latest additions to the roster bring flair for music, choreography and comedy to the diverse, woman-owned production company 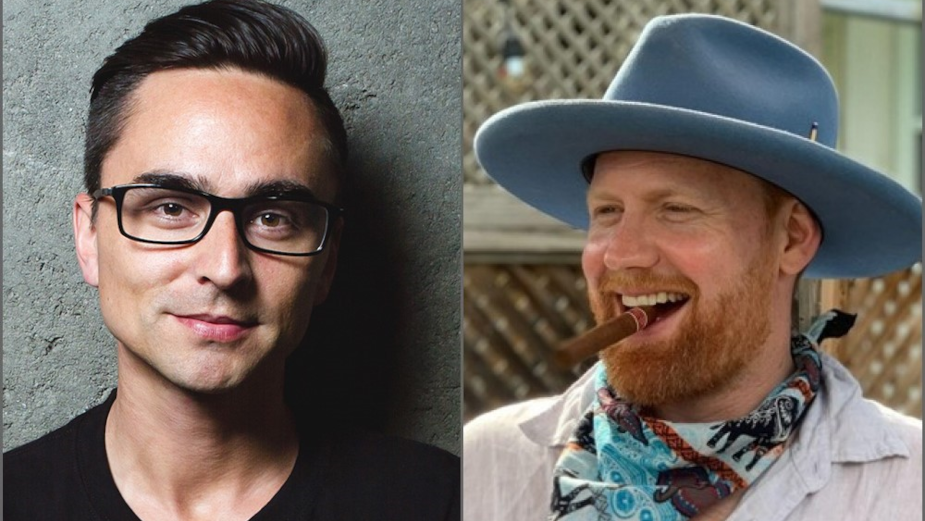 The Cortez Brothers, Inc., the multicultural, woman-owned production company based here, has announced the addition of two new talents to its directorial roster. Joining are directors Mickey Finnegan and Devon Ferguson. Their signings were announced by Cortez managing director Ed Rivero.

Mickey was most recently with the LA-based BestFriend, while Devon’s signing is his first with a US commercial production company. He’s represented by Suneeva in Canada, Birth in the UK and Wunderfilm in Germany. To view Mickey’s reel, go here. To view Devon’s reel, go here.

“Mickey’s done some very recognisable, high profile work, so he’s always been on our radar,” says Ed about the signing of Mickey. “When I learned that he was available I immediately reached out and we began a conversation. Once I got to know him it became clear he’d be a fantastic addition to our roster.”

His music video reel is equally prolific, with clips for such artists as LMFAO, Cee Lo Green, Lil Jon, Bella Thorne, Tyga and Soulja Boy that spans genres and styles. His work has been featured on MTV, BET, VH1, FUSE and E!, taking number one spots on various countdowns and amassing over two billion views online.

Mickey says that once he started talking to Ed, they discovered lots of serendipitous connections. “Ed was at RSA back when I was doing videos through Black Dog,” he recalls. He signed with the company, he explains, to boost his profile and expand his client base: “Having a production company like Cortez backing me will help me spread the word. My work has a style that’s fun and passionate, and I think we can bring that to a wider marketing world. I’m hoping they can bridge the gap and connect me with agencies and brands that are looking for that vision and sensibility.”

As a director, Mickey’s been honing his narrative chops, going beyond his music credentials into more dramatic filmmaking. “It’s all part of your repertoire of skills,” he states. “It’s about telling stories, which is why all of us got into this in the first place. I’m looking for opportunities to do just that, and hoping Cortez can help show me the way.”

Devon Ferguson grew up in Ottawa and is currently based in Vancouver. He's a graduate of the Humber Acting for Film/Television Program in Toronto and has trained at Second City, the Upright Citizens Brigade’s School of Improv and The Groundlings in Los Angeles. While training as an actor and working his side gigs, he also bought his own video gear and began writing and editing his own comedy shorts, which is what drew his attention to the production side of filmmaking.

He wrote and acted in several comedy web series, and started shooting parody commercials when he learned that he could participate in various brands’ contests for user-generated commercial content. The spots he wrote and directed went on to win over a dozen such competitions, allowing Devon to lend his style of humour to ads for brands as such as Lays, Doritos, Kraft and Shell, just to name a few. He was even a finalist in a recent Dorito’s Crash the Super Bowl ad contest, coming close to grabbing the top prize of a million bucks.

But it was his spec spot for Monster.com, titled “Stare,” that put him over the top when it was a Silver winner for “Best Use of Humour” at the 2021 Cannes Young Directors Award. The deadpan comedy was also a ‘TOP 10’ selection at the Berlin Commercial Awards and made the Kinsale Shark Awards’ shortlist for Best New Director.

Ed saw Devon’s work after he won the YDA Award and was impressed. “He’s clearly very funny, and his background in comedy, improv and acting gives him a great sense of timing which translates to his work. We’ve been looking for a comedy director who would both shoot and write, which fits with a lot of the kinds of comedy content brands are looking for now.

“Devon is that guy,” Ed continues. “He’s got that raw comedic sensibility that you can’t teach, you have to live it, and even though he’s a young director, he’s a veteran in comedy and really knows it technically. That experience will translate to the craft in his commercials.”

Devon says he was attracted to Cortez by the opportunity to build his presence in the US and by the fact that he fills a comedy niche on their roster. “They don’t have anyone like me right now, which means they can focus on boosting my career while I add a different twist to their talent offering,” he notes.

The ability to build a support team around him is also extremely appealing, Devon adds. “Chemistry is so important in comedy, and I think this will play a big role in my ability to tackle much bigger assignments,” he notes. His comedy chops and his training as an actor is going to be a big help, too: “When I’m working with comedy talent, it’s like we all speak the same comedy language and share the same goal, which is to make things funnier and make the performances sing.”

“I believe these two talents really help round out the Cortez roster,” says Ed. “Devon is a great comedy option, and his humour translates so well to so many assorted brands. We feel he’s really going to take off once his work gets out there.

“Mickey is a different animal,” Ed continues. “He comes from the worlds of music videos, gaming and promos, and he’s really great with celebrities. And his work as a writer for films has given him a well-rounded experience in many film platforms and genres beyond music, which is a major benefit given the wide range of deliverables we’re being asked to produce.”

The signings of Mickey and Devon cap a busy end of summer for Cortez, which recently wrapped three major projects for top brands.

Director Daniel Addelson has shot two long-form branded content pieces, one a 3:15 short for Mucinex and Casanova that highlights the contributions Latinos are making to their communities (see it here), the other a two-minute film for the USAF & GSD&M that highlights immigrant contributions to the service and its mission (check it out here).

Meanwhile, Cortez director Jerome Kruin shot a new Honda spot for RPA that highlights summertime savings on some of the carmaker’s most popular models.