Cornetto & MassiveMusic Team with Vlogger Teske to Share the Love 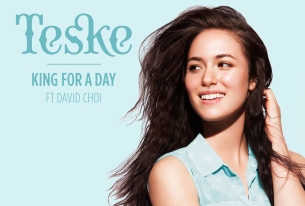 To kick-off their 2015 summer campaign, Cornetto have teamed up with Dutch Lifestyle vlogger and singer Teske de Schepper who performed ‘King For One Day’, the brand’s global campaign anthem.

Performed by Teske and David Choi, the track – which will be released in the Netherlands, Belgium, Spain and Denmark – was written and composed by MassiveMusic.

It’s the second successive year that Cornetto have collaborated with MassiveMusic, following on from last year’s successful sonic rebranding of the world’s most iconic ice cream cone.

Having handed out Cornettos, the duo encourage the people of Barcelona to ‘break the ice’ by sharing their ice creams with complete strangers, leading to intimate, charming and sometimes awkward moments between people who, in sharing an ice cream, are meeting for the first time.

“I loved going to Barcelona and carrying out the experiment,” says Teske, “Seeing all the amazing emotions of people on the street, just from sharing an ice cream!”

Music plays an imperative role in Cornetto’s brand strategy to tell authentic and relevant stories to its audience; ‘King For One Day’ is not just a catchy tune but a tool which helps to tell the brand story and gives Cornetto’s audience something to talk about and share with their friends.

The concepts of ‘love’, ’daring’ and ‘summer’ are the ideas behind the brand’s campaign and the track aims to subconsciously connect consumers to these feelings with the summery vibes and lyrics. The track is also seamlessly intertwined with Cornetto’s sonic signature to ensure the visual experience is connected to the unique sound.

“Cornetto approached us two years ago and asked us to build their Sonic Identity, which is basically their signature in sound,” says Michiel Cremers, Head of Sonic Branding at MassiveMusic, “This is the second global campaign that we’ve worked on with Cornetto and it’s great to see how the role of music has developed, becoming much more important and it’s paying off so well!”

Michiel adds: “This campaign extension and the partnership with Teske demonstrates how the music industry is changing. Brands are discovering the power of music as a branding tool and carefully curated music tells their story on a more engaging level.”

Having recently signed to Universal Music, nineteen-year-old Teske is one of the biggest vloggers in the Benelux region, amassing 200k subscribers to her YouTube channel and 135k followers on Instagram. Also on hand is LA-based vlogger David Choi, Teske’s self-confessed hero who has almost 1 million subscribers. Together, the two vloggers possess an extensive, youthful fan-base for Cornetto to tap into.

Ozlem Birkalan, Senior Brand Development Manager Ice-Cream at Unilever, says: “We want to tell authentic stories from our brands and Teske has a very genuine relationship with her fans – that is what inspired us to work with her. It is first time that Cornetto have worked with vloggers and we are very excited to see how Teske’s fans will react to the campaign!”

The video is live on YouTube and the campaign’s TVC and Radio commercials are on air now. The single is out now and is available in stores and on music streaming services, including Spotify.