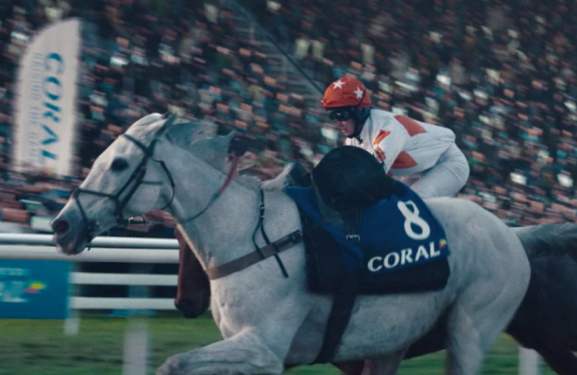 Today, leading betting brand Coral will launch the first in a series of adverts in an epic new campaign that looks to convey the incredible pace, passion, colour and drama of horse racing like never before.

‘Fail to Finish’, the first in a series of new TV adverts, showcases Coral’s unique customer offer on Jump racing whereby customers get their money back as a free bet if their horse doesn’t complete the race. Coral will then be launching a second 60 second centrepiece advert based around Flat racing after The Cheltenham Festival.

Dominic Grounsell, Ladbrokes Coral managing director of UK and Ireland says: “Our ambition with this advert is to do something totally ground-breaking in terms of concept, while taking the production up to a level not seen ever before from the bookmaking industry, and arguably in any cinematic recreation of horse racing.

“In producing a thrilling and raw recreation of the finish of a Jump race for this advert, we wanted to demonstrate Coral’s longstanding passion for horse racing - it’s about the spectacle, the excitement and the pure theatre that this incredible sport delivers to its fans.

“We hired top class talent to direct and produce this exciting series of adverts, and a great cast of horses, jockeys and extras to perform in it, and were able to leverage a combination of filming techniques that immersed the viewer in the horse race in a way that they won’t have experienced before.”

The ‘Fail to Finish’ advert shows a horse race in full flight, with a grey horse leading the field after jumping the last, before revealing that all is not as it seems. The grey is now a rider-less horse and the muddied jockey is lying on the ground by the last fence, resulting in a lost bet, but on this occasion our initially disappointed customer remembers that thanks to Coral’s Fail To Finish offer, he will get his stake back as a free bet (up to £10) and be able to try his luck in another race.

The TV ad will air from the 24th February and will run up until the end of April. Alongside the TV campaign, there will be social media, digital and print activity to support the messages, with supporting activity online and in Coral’s 1600 betting shops.

The second 60 second centrepiece advert will launch later in March and will look to convey the excitement, drama and unique sense of anticipation that comes with the horse racing experience.

British filmmaker Jack Driscoll directed the ads and has previously worked with brands like Adidas, Google and Red Bull.