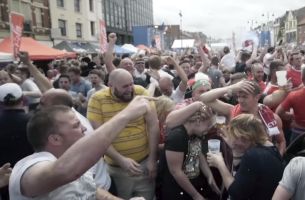 COPA90, the definitive youth football media brand, has created ‘Free the Lions’ - a unique two-part series that explores England’s national identity through the lens of the England football team as they prepare for Russia 2018.
The idea behind the films is that ‘fear’ is the England team’s greatest nemesis, and in order to break the cycle of unrealistic expectations, under-performance and hysterical over-reaction, we need to free the Team, and ourselves, from this fear.
COPA90’s films share a tone and production style that’s radically different to the usual World Cup build-ups from traditional broadcasters, involving passionate fans and real stadium footage alongside exclusive interviews with the England team.
‘England & The Media – Time to change the toxic relationship?’ – a 12-minute documentary - explores the media’s relationship with and treatment of the England team.
In this film, COPA90 presenter Eli Mengem speaks to fans, journalists and (in remarkably frank interviews) England 1st Team players to ask whether the coverage of the Team in the press negatively affects performance on the pitch.
‘

Let this be the new England’ – a 12-minute documentary, also presented by Mengem – holds a mirror up to England’s fans and the nation as a whole.

The film explores the increasing disconnect between England fans and the Team, the effect that this has on both sides, and asks some difficult questions about what is at the root of this malaise. Namely, are we so miserable when it comes to international football due to negative perceptions of our national identify? The film looks ahead to a future where the English national team could be a symbol of positive English values that still exist even if the Team isn’t winning - creativity, humour, multi-culturalism - and asks if we can all give ourselves a break.
Lawrence Tallis, head of creative at COPA90 said, "Through these films we want to bring the fans and the players closer together by opening up communication and engendering some empathy, and encourage the media to take an approach to the team that doesn't fuel the negative cycle of unrealistic expectations, underperformance and overreaction.
We want to help England fans fall in love with England again and heal the wounds of Euro 2016, when England crashed out of the Euros and fans were involved in horribly familiar scenes of hooliganism. Also, in the aftermath of the deeply polarising Brexit vote, we hope to use football to help understand the national identity crisis that the country is suffering right now".
view more - Creative