Content will include the ultimate football road trip with Eli Mengem 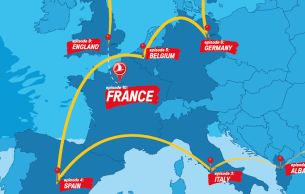 Content will include the series ‘Meet Europe’s Best’ – the ultimate football road trip – with coverage of Europe’s ‘best fans’ which will explore why international football is so special to them, and how it unites fans from all walks of life.

Hosted by Eli Mengem, viewers will follow him travel across ten countries in ten days starting in Istanbul and ending in Paris the day before the tournament starts.

Also in development is ‘Are You Europe’s Best’ with four Copa Creators documenting their experiences throughout the tournament.

All content will run across Copa90 and Turkish Airlines channels with the approach throughout being fan-first to reach and engage a connected Millennial audience.

“We’re interested in collaborations with people who are serious about football, and Turkish Airlines are proving yet again that they want to get to the heart of football and what it means to be a fan,” says James Kirkham, head of Copa90 and Chief Strategy Officer of Copa90 owner Bigballs Media.

“This is branded content at its very best, where together we get to look behind the nations at the centre of Euro 2016. Unearthing magical stories and conveying them with passion and true authenticity makes this something special for audiences around the world.”

Turkish Airlines’ chief marketing officer Ahmet Olmuştur said: We’re extremely excited to announce Copa90 as our digital content partner for Euro 2016. Our ‘Meet Europe’s Best’ campaign is designed to spotlight the best fans from around Europe who go to the greatest lengths show their love and passion for their national team.