Coors Light Gets Habs Fans Into The Action 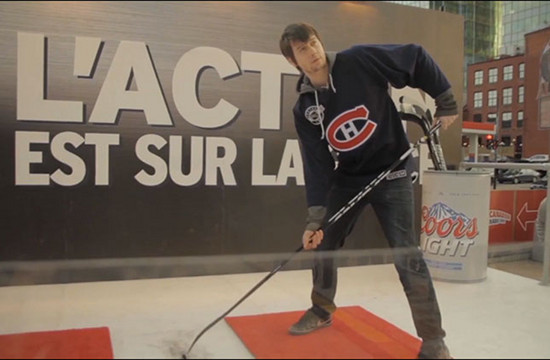 The Montreal Canadiens, the most celebrated team in hockey history, has one of the most passionate and diehard followings in the NHL. So during this year’s Stanley Cup run, Coors Light teamed up with MEC Canada and DraftFCB Montreal to create an interactive outdoor experience called "L’action sur la glace” or “The Action’s On The Ice”, bringing the fans even closer to the action.

Outside of Montreal’s Bell Centre, the home of the Habs, Thinkingbox digital production company built a custom 240 square foot ‘shooter’ platform where fans were able to take their best and hardest “slap shot”.  Each time, the strength and speed of the shot would trigger a specific 3D animation that appeared on a 45’ HD LED video wall. For example, if the puck was hit hard enough to score a goal, an animation showing the ice shattering as well as a 3D modeled representation of Bell Centre and the Montreal Canadiens’ locker room would appear. Everything was done to recreate and simulate the experience of scoring a goal for the average fan.

The activation included a custom iPad application that controlled the flow of the event. It was synced with social sharing technologies so players could publish their experience on their respective networks. The platform included a puck track containing IR sensors and micro-controllers that converted fans’ shots from microseconds to km/h.