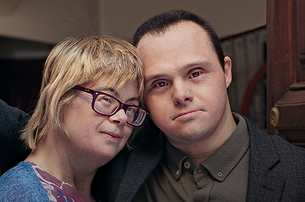 The new international campaign for CoorDown launches today.  It focuses on the notion of autonomous living for people with Down Syndrome, including independence of moving into your own house.  This is a common dream among couples.  Even people with Down Syndrome have the same desire.  They have the right to a romantic relationship, to conduct an independent life and to build a family.  Same opportunities and same choice range.  This year is the 10th World Down Syndrome Day, Saturday, March 21, 2015.

The main characters of the heart-warming film are Salvatore and Caterina, both both living independent lives with Down Syndrome.  They want to live together and Salvatore has finally decided to ask Caterina in a special way: with a surprising proposal at work. When Salvatore comes in, Caterina doesn’t what is going to happen. He is not alone:  The cappella vocal group, Neri per Caso, accompany him singing “Come Away With Me" by Norah Jones.  When Salvatore kneels down and pulls out a box, there’s another surprise: inside there isn’t a ring but the key to their new home.

Produced by Filmmaster Productions, the film is technically ambitious: the first part is filmed from a subjective point of view and more than 10 hidden cameras were needed to film the proposal without Caterina spotting the surprise.

"Our communication”, confirms Sergio Silvestre, CoorDown President, “is consistent with the spirit and principles that guide the United Nations Convention on the Rights of Persons with Disabilities.  This document is a universal statement and tuition for people with Down Syndrome, the protection of their rights to live an independent life and to be fully integrated into society, and this needs to become a heritage not only for Italy but for all those countries that have signed and ratified that document.  We hope that our communication projects will contribute to a greater awareness of these issues. "

"This is the fourth year of our collaboration with CoorDown and we are incredibly proud of how all the people involved in this initiative shared all their passion and professionalism in this project.  This is why it felt so special,” said Giuseppe Caiazza, CEO Saatchi & Saatchi Italy and France and Head of Automotive Business S&S EMEA.  “Again, CoorDown has perfectly understood that an innovative approach can make a real difference."

‘The Special Proposal’ reunites CoorDown and Saatchi & Saatchi again after three successful projects that brought the agency 17 Lions at the last three Cannes International Festival of Creativity and a Grand Prix at ADCE.  In 2012 ‘Integration Day’, in 2013 #DammiPiùVoce and in 2014 ‘Dear Future Mom’.