Editors' Choice: TBWA\HAKUHODO shines the spotlight on the professionals of Japan with latest CARAVAN film 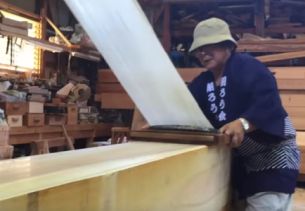 Nissan has partnered with TBWA\HAKUHODO Japan to launch their latest online video, promoting the NV350 Caravan. The film is dedicated to the level of master-craftsmanship demonstrated by the professionals of Japan, and showcases how Nissan supports these agile, dexterous and talented individuals who represent the backbone of Japanese artistry.

Many individuals in construction, as well as other key industries in Japan, use the NV350 Caravan – people who Nissan refer to as ‘CARAVANISTS’. With the launch of a dedicated website called the ‘CARAVANIST BASE’, Nissan looks to engage with these professionals, and showcase the level of talent that sometimes goes unnoticed, and skills that are wonderfully impressive.

The film features total of 11 professionals, demonstrating how everyday labours have honed impressive abilities – including scenes in which plaster is marvellously transferred from workman to workman; where a truck driver offloads logs in one deft swoop; and where window cleaners suspended in mid-air, flex their amazing skills in absolute synchronicity.

The website also features the stories of unique CARAVANISTS, and also welcomes other professionals to be interviewed with instructions on how to get involved. The movie posted on Nissan Japan’s Facebook page has received a record-breaking response of over 33,000 shares and 57,000 likes in the first 10 days since the launch.

With this campaign, Nissan also hopes to play a small part in attracting a new generation of highly skilled workers to the construction industry. As the country readies itself for the 2020 Tokyo Olympic and Paralympic Games, the industry has enjoyed a significant boom. However, a lack of new blood has presented a serious problem for the industry, which already suffers from an aging society.