Contagious London & Reed.co.uk Are Getting the UK to Love Mondays 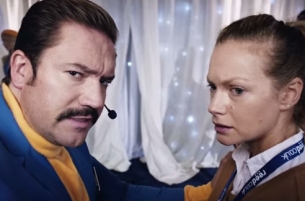 The New Year burst, which will run until Easter, features a new incarnation of the James Reed character, this time as a motivational speaker.

Previous campaigns have seen the character, played by actor and comedian, Rufus Jones, appear as a space commander and then a superhero on a crusade to make the UK workforce love Mondays by being in the right job.

Created by Contagious London, the 2015 campaign will play out across television, on-demand, online, social media and mobile advertising and will include five brand new TV commercials and four new YouTube adverts.

TV has been planned by MediaOdyssey, whilst digital strategy and creative has been the responsibility of iCrossing.

The new campaign represents the company’s largest investment in advertising to date and will ensure reed.co.uk is the most visible name in recruitment in 2015.

Mark Rhodes, Marketing Director at reed.co.uk comments: “reed.co.uk's Love Mondays campaign is well established on TV and the latest incarnation of our James Reed hero will help us to keep building on our position as the UK's favourite job site.

“Once again, we'll continue to innovate across multiple platforms, with more YouTube-specific ads, more social content, more video-on-demand and, for the first time, a new mobile campaign for on-the-go jobseekers.

“The campaign launch is perfectly timed: with the UK workforce returning on 5th January, we're expecting a bumper week of job applications.”

Paul Weiland, Executive Creative Director of Contagious London, commented: ‘We’ve been working with reed.co.uk since 2008 and have helped them become the UK’s number one job site with the 'Love Mondays' campaign.  The latest incarnation of the James Reed character takes the campaign into new territory and really capitalises on the humour we’ve instilled over the years.”

The work was written and directed by Jonathan Brooks and Mat Laroche and overseen by Paul Weiland.