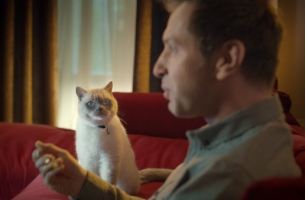 Quiet Storm has launched its first TV campaign for Young’s Seafood since winning the account in July last year. Exploring the concept of food envy, the multi-million pound advertising campaign, features a new character for the Young’s brand – a discerning foodie cat called Malcolm – who loves his food. He longs for the Young’s fish dishes enjoyed by the friendly family he lives with. Malcolm is voiced by English actor Rupert Everett, who has starred in many films including My Best Friend’s Wedding, Shakespeare in Love, The Next Best Thing, Stage Beauty, Stardust and St. Trinian’s and has been the voice of Prince Charming in the Shrek movies.

The first wave of the campaign focuses on Young’s Gastro range of restaurant inspired fish dishes. The campaign will go on to celebrate many of the other delicious fish dishes under the Young’s brand, including Chip Shop bubbly battered fish and innovative new product development set to launch during 2015. The TV advertising campaign will continue through 2015, alongside additional content on YouTube, Innovid and social media. Promotional activity will include in-store marketing and a range of promotions.

Trevor Robinson OBE, Founder and Executive Creative Director of Quiet Storm, Young’s new advertising agency, said: "We are really delighted to be involved in establishing this iconic British brand in the hearts and minds of a new generation of consumers, helping them to appreciate a love of fish. We felt that using the character of a high-brow, discerning, food connoisseur cat, with sophisticated tastes in seafood, would help to highlight the high food values of the brand in an accessible, entertaining and memorable way.”

Yvonne Adam, Marketing Director at Young’s Seafood Limited, said: “Our new campaign is all about food envy and food that you really look forward to coming home to. With our Gastro range, we’re serving up restaurant inspired fish dishes created by our development Chef Serge Nollent, and the campaign highlights the quality of Young’s food through the eyes of our foodie, but frustrated cat Malcolm who never has any Young’s fishy in his little dishy!”

Wayne Hudson, Managing Director of Young’s Seafood Limited’s Frozen business, added: “The new campaign is an important part of what we see as a new era for Young’s, a brand with a proud heritage and an exciting future in fish and seafood.

Specialising in making the best fish delicious, we believe there is a significant opportunity to encourage people to try a broader range of seafood, with new product development and our new, entertaining campaign.”

The first wave of the TV advertising campaign features Young’s Gastro Lemon Tempura Basa and Gastro Cod, Spinach and Cheese Gratin, which is from the new range of meals for one, available in all major retailers.

You can check out a bunch of behind-the-scenes videos below, including a cat casting call.