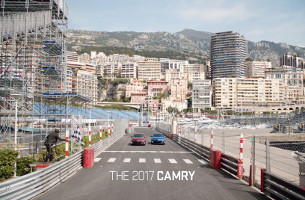 A life-long sibling rivalry, one bold wish and the world’s most iconic racecourse set the stage for an emotional new campaign for the 2017 Toyota Camry by Conill. Filmed entirely on location in Monaco, the work tells the story of two brothers whose competitive spirit culminates in a once-in-a lifetime opportunity to race each other at the famed Circuit de Monaco.

Over the course of the twists and turns of their friendly competition, the brothers find that their love for one another outpaces their competitiveness. The full-length 90-second commercial launched last week on YouTube and other digital outlets. 30 and15-second versions of the work are running on network properties, along with 6-second YouTube bumper ads.

“Camry is the flagship of Toyota that represents the soul of the brand,” said Conill Executive Creative Director Diego Yurkievich. “The vehicle exudes style and is fun to drive, making it a catalyst for unique experiences. Consumers have a very special relationship with Camry – a true love for the brand and car. We had to deliver on those deep feelings authentically and felt that it was best expressed through a real relationship that transcends words and language. An emotional connection in the purest sense.”

Directed by Armando Bo, the 2014 Oscar-winning screenwriter of Birdman, the 90-second version of “Monaco” captures the emotional bond between the brothers in stunning visual fashion. The production of took place during a logistically challenging four-day shoot that required multiple cameras, a Russian arm and aerial drones.

“We really wanted to picture Monaco in a glamorous way, avoiding stereotypes and clichés about this wonderful city,” said Bo. “We were looking for Monaco´s real backstory and the important people who were there. Not the Casino and the glitz. We wanted to know how a regular guy would feel if he had a chance to drive his car in the Circuit De Monaco. But most of all, we wanted you to care about these guys and their big dream.

An originally scored soundtrack perfectly complements the work and tells the narrative through classic swing jazz reminiscent of the great popular crooners of the mid-twentieth century. Produced by Personal Music in Miami, the music was recorded by Grammy winning musicians and composers Alexis Estiz and Alberto Slezynger.