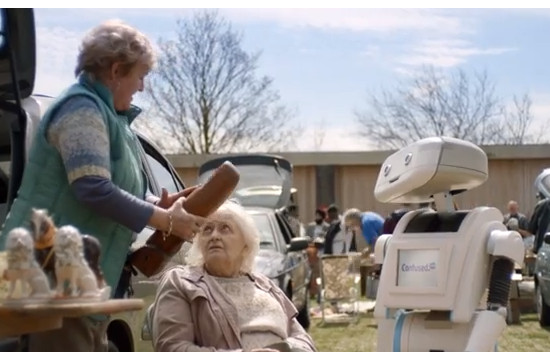 Confused.com is launching the second phase of its multimillion pound BRIAN the Robot advertising campaign today (Mon. June 10), which shows BRIAN interact with members of the public for the first time on our TV screens.

In ‘Car Boot’, BRIAN approaches a stunned looking woman and her friend at a car boot sale, introducing himself: "Hello Madam, I am Confused.com the fastest insurance comparison robot in the world, but you can call me BRIAN.”

Through the awkward exchange, BRIAN explains that he has run her details through his extensive circuits resulting in a saving of £225 on her car insurance, if she used Confused.com. By potentially saving her money, BRIAN is pleased to have succeeded in his mission, to which he adds: “I have been pleasured. Bye bye."

BRIAN’s misuse of the popular phrase ‘it’s been a pleasure’ reflects his unfamiliarity with our everyday phrases and nuances. BRIAN uses commonplace jokes and catchphrases which almost connect with us, but they become accidentally awkward and funny as his intonation and phrasing is always just a little off. However, this eagerness to please and attempt to connect with customers also conveys his charming nature and his vulnerability as he explores the new world around him.

The hashtag #BriantheRobot encourages viewers to interact with BRIAN on Twitter, where he has his own feed @BRIANtheRobot. Through this, people can learn more about BRIAN and his adventures, whilst also allowing them to engage with BRIAN in real time as he answers questions and reacts to trending topics. Other social and digital elements include pages on Facebook, Twitter and YouTube, as well as Instagram, Tumblr and Google+.

The campaign is also being supported by radio, press, outdoor, digital and PR, and further TV executions showing BRIAN attempting to help people – hampered by social skills limited to what he has learnt online – will be released through the year.

It launched on June 01, as part of a wider piece of activity that is repositioning the brand as an insurance expert. The first spot, ‘Lab’, showed the birth of BRIAN, from his design and build at Confused.com’s Cardiff HQ, through to his eventual release into the wider world.

The advertising campaign has been created with Publicis London, which helped develop Confused.com’s new brand model. Confused.com also worked with ‘Thompson Brand Partners’, Ogilvy PR, and PHD to support them on the re-brand.

Joby Russell, Marketing Director at Confused.com, says: “We’re really excited to launch the second phase of our advertising campaign, particularly as we’ve had such a positive response to BRIAN so far through online engagement. Customers seem to be interacting really well with him via different social media channels, and are enjoying getting to know his unique personality.

“We’re hoping that people will be keen to find out more about BRIAN as he ventures out into the world, whilst also helping them to save money in the fastest and most efficient manner. We’re looking forward to the next chapter in BRIAN’s mission to save people pounds and hope the public are too.”