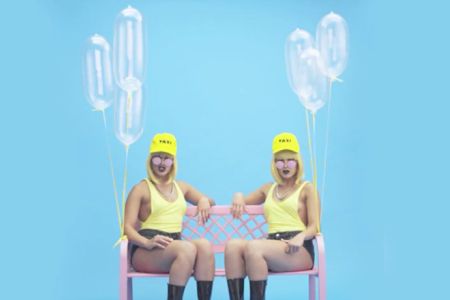 The film is called 'German Shlong' and the words are a mash up of English, German and Hebrew, as the film is aimed at Israeli teenagers.

Tal says: “Two weeks ago, I was approached by Great Digital Partners, an Israeli digital commercial agency, to create a cult video for R3 condoms. R3 is the underdog in the Israeli condom market, so they asked me to create something that will make people take notice, featuring the Israeli trash stars - the Malul Twins. The deadline for the project was the Pride Parade in Tel Aviv – which was only two weeks away - and I was given a free-hand and a sack full of condoms. The budget was minimal, so I realised that the best way to pull off something boisterous would be through trashy styling and creative use of condoms. I created a storyboard of funny images, and collaborated with Yael Weiser, an art director whose stylish work I love, and we started rolling."

He continues: "The client and agency were very supportive, and there was a great appetite for making something really outrageous. Everyone gave their all to their handiwork, quite literally...Alon Lutsky, the DOP, is the hand that puts the needle in the condom; Rachel Boxnboim, the producer, is the hand with the rubber johnny hot dog; and mine is the hand with the prophylactic barbells. In the editing room, Shahar Beeri the editor and I couldn't stop laughing from the self-aware ridiculous-footage, we pushed the style for maximum stupidity. Wondering if we’d gone too far - but after screening to the client and they started to applaud, I realised that the mission was accomplished: we made a really, really outrageous ad!"

"The video was released today and has already made an impact in the Israeli media. It was the first time I’ve directed something ‘trashy’ and I must say that it was a big guilty pleasure."

Tal concludes: "Joining Great Guns is a dream come true for me. I’m a huge fan of GG’s directors and feel very privileged to join such a remarkable group of artists. I intend to bring a fresh and eccentric approach to filmmaking, and to push the creative boundaries to their limit. I’m grateful to GG for their faith in my art, and have a strong feeling that it’s gonna be a hell of a ride. Damn, let the briefs begin!"