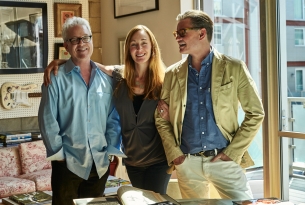 Concrete + Clay welcomes a wave of new talent with the signings of directors Graeme Joyce, Paul Schneider and Kat Coiro. This troop of image-makers comes over with longtime industry executive Mike Brady, who now joins the company as Executive Producer.

Mike Brady is an industry veteran who has worked with some of the best-known directors and producers in commercials, TV, music videos, and independent film. Brady arrives most recently by way of Hello!, where he oversaw the company’s commercial business as Executive Producer. Brady now brings his years of experience to Concrete + Clay, joining Nicks and EP Carrie McLaren at the helm to build and elevate the company’s roster of multi-faceted talent.

“It was clear after talking with Dewey and Carrie that we shared the same goals of nurturing really strong directors,” remarks Brady. “It’s rare to find people who have been leaders in the industry for many years that are still interested in solving problems, and figuring out the best ways to service ideas and help directors to deliver a brand message creatively and on-point. That’s something that Dewey and I connected about immediately; we love what we do and wake up excited about it every day.”

Dewey echoes the sentiment, saying, “Mike is an EP that truly mentors and champions talent, which completely fits with our company attitude. It was clear early on that Mike is a kindred spirit, and that this would be a great marriage between like-minded parties.”

Dewey Nicks has been working as a professional fashion and commercial photographer for nearly 30 years, creating the iconic advertising images for clients such as Tommy Hilfiger, Guess, and Polo, and his print work has graced the pages of top glossies such as Vogue, Vanity Fair, and GQ, among others. His work in the moving image has been met with the same acclaim since he first added commercial directing to his resume in 1999, including a DGA nomination for Outstanding Directorial Achievement in Television Commercials.

Nicks’ double-threat position has made him uniquely qualified to shoot both the still and motion components for many brand campaigns. In 2011, he and McLaren launched Concrete + Clay to address this shift in business.

“The company was born out of idea that it was better for both the client and for us to be more flexible,” Nicks explains.  “Being able to shoot all the elements of a campaign increases the viability of our sets and allows so much more creative value to be brought to the project.”

Nicks and McLaren have since assembled a crew of multi-hyphenates who can package stories cohesively across various formats, from magazine editorials to behind-the-scenes content to global broadcast campaigns.  The addition of Joyce, Schneider, and Coiro to the roster continues this legacy.

“While each director has their own style, the work of the Concrete + Clay roster complements each other well,” director Graeme Joyce notes. “The company excels at creating strong work that connects to audiences in a very real way, which is especially important with authenticity as the present zeitgeist.  There is a sense of warmth and humanity to all of the work.”

From his start in music videos, Joyce’s innate and detailed design sensibility has led him to helm innovative spots for such clients as Target, Mercedes, Chase, GMC and British Airways. His venture into lengthier narrative work was the short film Lifetripper, a bittersweet look at a man who quietly realizes his potential as a comic. The film, also co-written by Graeme, went on to win Best Drama at the Super Shorts 2012 International Film Festival in London.

Paul Schneider was co-founder of LA-based multidisciplinary studio Wideopenspaces before moving to Chicago to join Digital Kitchen, where he served as Executive Creative Director for five years before moving into filmmaking full-time. Channeling his roots as former professional skateboarder combined with his experience in design and vfx, Schneider’s directing work is personal and energetic, and highlighted by recent campaigns for Levi’s, Budweiser, Discover, Blue Cross, Vicks, and Gillette.

Award-winning director, writer and producer Kat Coiro has enjoyed an amazing rise over the past few years, creating two shorts and three features since 2010, beginning with her first film L!fe Happens. Her sophomore feature And While We Were Here premiered at Tribeca in 2012 to rave reviews, while her most recent film A Case of You, starring Justin Long, Evan Rachel Wood, Sam Rockwell and Vince Vaughn, distributed by IFC.  Her advertising work includes spots with Virgin Atlantic, Coldwell Banker, and Sketchers.

Now with an even more diverse pool of talent to draw from, the Concrete + Clay collective advances forward, ready to enthusiastically deliver captivating visual stories in any format a project may require.