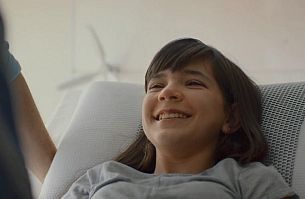 Computing can seem vague and impersonal. But a new series of ads for Dell by agency Y&R New York shows how it will continue to change our lives in subtle and powerful ways.

The 'Future Ready' campaign features a series of intertwining vignettes about Amy, a young girl getting a heart transplant. It builds off last year’s 'Beat Again,' where advanced visualisation technology helps a doctor save Amy’s life.

The ads highlight things people don’t necessarily know about Dell, such as cloud computing and its ability to power big data. They show a just-barely futuristic world where the same technology that saved Amy makes little things simpler, like ordering sushi in a hotel room or knowing when the school bus is going to arrive.

The ads come with a serious Hollywood pedigree. They were directed by Henry Alex Rubin, known for landmark campaigns such as 'Whopper Freakout' for Burger King as well as the documentary 'Murderball.' They were shot by Janusz Kamiński, the Academy-award-winning cinematographer of 'Schindler’s List” and 'Saving Private Ryan.' Set design was by K.K. Barrett, production designer for films such as 'Her' and 'Being John Malkovich.'

Music Production: Made to Feel

How Certainty Is Controlling Our Forward Movement
View all News