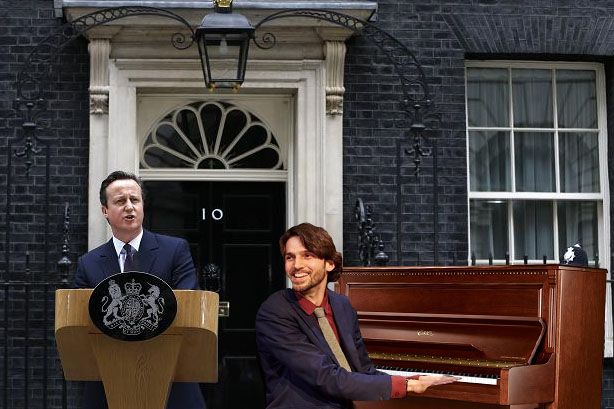 Composer, Thomas Hewitt Jones has gone viral after his interpretation of a tune hummed by David Cameron became an online sensation.

As David Cameron returned to 10 Downing Street after a press conference to deliver his resignation announcement, he hummed a cheerful tune that has become somewhat of an Internet hit. The soon-to-be-ex Prime Minister’s self-composed ditty captured the imagination of composer Thomas Hewitt Jones, who then worked through the night to write and record a piece based on the tune for cello and piano.

The Manners McDade composer, known for his orchestral work for the London 2012 Olympics and his piece Panathenaia, performed at the British Museum last year, has since been flooded with kind words and attention from up and down the country. Thomas has been interviewed on LBC and the piece has been played on CNN, Classic FM and BBC Radio 4.

Thomas said of the experience: “I am overwhelmed by the response to the track...I was delighted to partner with Classic FM to bring this musical response to the wide public, and the amount of media attention it has garnered has been absolutely astonishing.”

Thomas hasmade the sheet music for the piece available as a free download from the Classic FM website, so that that anyone can perform it. Perhaps a copy will even end up back at No. 10.